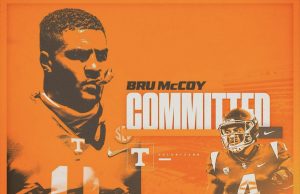 Tennessee wide receiver Bru McCoy came to Knoxville from USC via the transfer portal. Photo via @BruMcCoy on Instagram.

Let’s go back in the time machine a bit.

During the 2021 season and the following off-season, the Tennessee football team lost 18 players to the transfer portal. Fortunately for Tennessee, though, the Vols were the fifth-ranked team in terms of which schools lost the least amount of starting experience through their portal. So while 18 was a relatively significant number, Tennessee didn’t lose too much starting experience.

On the flip side of things, though, Tennessee wasn’t bringing in a ton of experienced talent either. Wesley Walker was a standout for Georgia Tech, but Andre Turrentine was stuck on the Ohio State depth chart and Bru McCoy was dealing with off-the-field drama with Southern California. While none of them were guaranteed to be productive for Tennessee during the 2022 season, each one of those three ended up making a sound impact on the team this year.

Here’s a look from May 2022 at where Tennessee stood among other teams in the portal:

McCoy ended the season as Tennessee’s second-leading receiver with 48 receptions for 619 yards and three touchdowns. The former USC transfer made some unbelievably critical plays for the Vols, including the setup catch that led to Chase McGrath’s game-winning field goal attempt against Alabama.

On the other side of the ball, Walker ended as Tennessee’s 10th-leading tackler on the year and had the 5th-most tackles among Volunteer defensive backs. Turrentine didn’t play as much as Walker but provided Tennessee with solid depth that would be called upon each game.

More from RTI: How Tennessee Quarterback Transfers Fared At New Schools In 2022

With the regular season officially in the rearview mirror, the transfer portal activity is on the verge of skyrocketing, just like it did last year. According to multiple reports around the sports world this weekend, no less than five SEC players have already entered the portal following the close on Saturday.

There’s no telling which direction Tennessee will try to recruit from the transfer portal, but clearly, experienced additions to the defensive side of the ball would be welcomed. It’s also hard to predict who may be leaving the Tennessee program in the next few months, which is always an interesting component of the machine.

One way or another, though, buckle up. The college football transfer portal season is always one of the most chaotic times of the year.

Here’s a quick look at Tennessee’s transfer portal activity (via 247Sports) during the 2021 season and the following 2022 offseason:

WR Bru McCoy – Jan. 13
Was a starting wide receiver for every game except for Vanderbilt