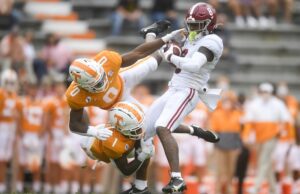 Tennessee vs Alabama on the football field. Photo via Tennessee Athletics.

Alabama head coach Nick Saban is now looking to replace both his offensive and defensive coordinator this offseason.

According to ESPN on Tuesday morning, 53-year-old Bill O’Brien has accepted a job to become the New England Patriots next offensive coordinator after two years with the same position at Alabama.

O’Brien had superstar quarterback Bryce Young as the Alabama signal caller for both of his years with the Crimson Tide, but is reportedly going to New England because of his relationship with former Alabama quarterback Mac Jones.

Still, though, that leaves Saban to find his sixth different offensive coordinator in the past eight seasons. As pointed out by ESPN’s Matt Reiss, the previous five Alabama offensive coordinators are now either NFL coaches or Power 5 head coaches: Steve Sarkisian, Mike Locksley, Brian Daboll, Lane Kiffin, and Bill O’Brien.

Alabama is also looking for a new defensive coordinator this offseason after previous DC Pete Golding left the program in mid-January to take over the same position on Lane Kiffin’s Ole Miss staff.

According to ESPN, “Golding’s decision to leave Alabama was his own and that he was not pushed out, but rather he felt this move was best for him and his family.”

After former Tennessee head coach Jeremy Pruitt ran the Tide’s defense for two years from 2016 to 2017, Tosh Lupoi took over for one year in 2018. That opened the door up for Golding in 2019, who has held the position for the last four seasons.

This will be the fifth time in Saban’s career at Alabama that he will be bringing in new coordinators on both sides of the ball. As mentioned by CBS Sports’ David Cobb on Tuesday, Saban also did so in 2007 (Major Applewhite and Kevin Steele), 2008 (Jim McElwain and Kirby Smart), 2018 (Mike Locksley and Tosh Lupoi), and 2019 (Steve Sarkisian and Pete Golding).

The Alabama football team finished the year with the fourth-highest scoring offense in the nation with 41.1 points per game last season. That was three spots behind Tennessee, who finished No. 1 with 46.1 points per game in 2022.

The Tide finished the 2022 season with the No. 13 total defense in the country, giving up an average of 318.2 yards per game.