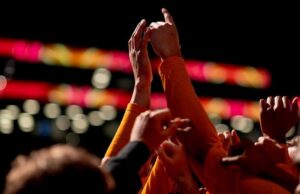 Tennessee and Arizona took part in a back-and-forth slugfest on Saturday night in Tucson as the Vols fell to the Wildcats by a score of 75-70.

After Tennessee’s four-point victory over Arizona in Knoxville last season, there was plenty of reason to believe that this game would be more than just a regular non-conference matchup between these two Top 10 teams. And, sure enough, that was the case.

From Uros Plavsic’s technical foul in the first minute of the game to the animated conversations after the game, the contest on Saturday night felt personal.

During the postgame celebration on the court, Arizona forward Oumar Ballo appeared to throw up the middle fingers high in the air walking around the court.

OUMAR BALLO IS MY KING pic.twitter.com/poWb7sVzzw

Around the same time as Ballo’s double bird, there were also some words exchanged between the Arizona and Tennessee players near the Vols’ bench.

Some postgame words between Wildcats and Vols.

Zakai Zeigler spoke about the moment after the game, simply referring to the competitive nature taking over after a hard-fought game.