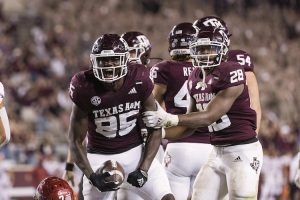 Reports state that Bobby Petrino is set to become the next OC of Texas A&M. Photo By Bailey Orr/Texas A&M Athletics.

Former Arkansas head coach Bobby Petrino is set to make a return to the Southeastern Conference.

According to ESPN‘s Chris Low on Wednesday afternoon, Texas A&M and head coach Jimbo Fisher are hiring Petrino as the Aggies’ next offensive coordinator.

Petrino has spent the previous three years as the head coach of Missouri State, which led to him accepting the UNLV offensive coordinator job on Dec. 15 under former SEC coach Barry Odom. Despite that, though, Petrino now looks to already be on the move after less than four weeks with his new position at UNLV.

Jimbo Fisher is finalizing a deal to hire Bobby Petrino as @AggieFootball’s OC and Petrino will take over play-calling duties, sources tell ESPN. Petrino, one of the top offensive minds in football, was briefly OC at UNLV after spending last three seasons at Missouri State.

Petrino’s SEC career doesn’t come without the reminder of controversy, though. Bobby Petrino was fired from Arkansas in the spring of 2012 after lying to university officials following a motorcycle accident with a female staff member that he was having an affair with at the time.

Still, though, Petrino’s SEC experience is certainly something that will provide value to Jimbo Fisher’s Texas A&M staff.

Bobby Petrino, Jimbo Fisher, and the Texas A&M Aggies will travel east to Knoxville, Tennessee for a matchup against the reigning Orange Bowl Champion Tennessee Volunteers on Saturday, Oct. 14, 2023. Tennessee will be coming off of a bye week prior to the game against Petrino and the Aggies.