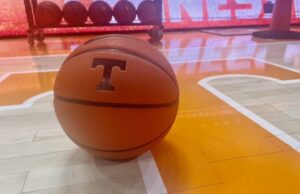 Despite a loss to Kentucky this past Saturday in Knoxville, the Tennessee Volunteers basketball team hasn’t moved in the most recent bracketology update from CBS Sports’ Jerry Palm.

On the Friday before the Kentucky game, Jan. 13, Palm’s rankings had Tennessee as the No. 2 seed in the midwest region.

Even with the loss, though, Tennessee still lands as the No. 2 seed in the midwest region according to Palm’s latest bracketology update Monday morning.

The No. 9 Volunteers currently sit at 14-3 overall with a 4-1 record in conference play through this point in the year. Tennessee has lost to Colorado, No. 9 Arizona, and Kentucky, but do boast wins against No. 3 Kansas,  No. 13 Maryland, and Mississippi State.

Tennessee is the second-highest-ranked team from the SEC out of the six teams on the board.

In the AP rankings that were released on Monday, Tennessee does remain in the Top 10 for the seventh consecutive week despite the 63-56 loss to Kentucky on Saturday afternoon in Knoxville. The Vols landed at No. 9 in the Jan. 16 polls.