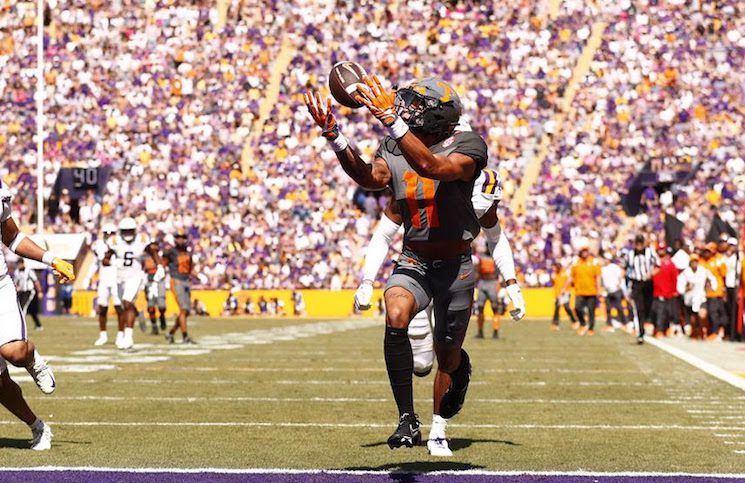 The Fred Biletnikoff Award is given to college football’s most outstanding receiver by the Tallahassee Quarterback Club Foundation. Hyatt is the first Tennessee wide receiver to win the award since the award’s inception in 1994.

The third-year wide receiver was one of the biggest storylines coming into the season for the Tennessee Football program. Head coach Josh Heupel, quarterback Hendon Hooker and the rest of Tennessee’s staff raved about Hyatt’s progression in the offseason and how he had the potential to have a big year.

Heupel frequently brought up that Hyatt had become a more well-rounded receiver, and that he was in a good place physically and mentally heading into the 2022 season.

“Jalin Hyatt has done a great job of changing his body,” Heupel said after a spring scrimmage. “He is doing a great job of embracing physicality. I think he kind of saw himself in high school and at younger years as a speed guy. We talked, even before I got the role, about him embracing physicality and bringing that part of his game out. He’s done a great job of embracing that. I think mentally, off the field he’s taken a huge jump. He’s in the building 24 hours. A lot of times I’m leaving late at night and he’s either pulling off or about to walk out of the building as well. He’s done a great job of buying in and it’s consistent. Regardless of what result he’s getting at practice week-to-week. Whether he’s having a great day or if he’s having an average day, he’s in the building, he’s staying consistent. I think he truly understands the process. I like where he is.”

Heupel and the staff’s high hopes for Hyatt were fulfilled as soon as the Irmo, South Carolina, native stepped on the field this season. Hyatt scored Tennessee’s first touchdown of 2022 on the Vols’ very first play from scrimmage on offense when Hendon Hooker hit a wide-open Hyatt for a 23-yard touchdown against Ball State.

Hyatt’s first play from scrimmage was just a glimpse of what would become one of the best, arguably the best, season from a Tennessee wide receiver of all-time.

Hyatt’s 15 touchdowns set a program record, topping Marcus Nash’s total of 13 in 1997. Hyatt set the record in just the eighth week of the season when the Volunteer wideout torched the Kentucky Wildcats for five catches, 138 yards and two touchdowns.

The junior’s big night against the Cats was far from the highlight of his award-winning season, however. Hyatt cemented his legacy as a Vol great by catching five touchdowns and going for over 200 yards in Tennessee’s win against Alabama. Hyatt and Hooker’s connection was an unstoppable force in Knoxville on the Third Saturday in October, as the two connected six times for 207 yards and five touchdowns, one of which tied the game late in the fourth quarter.

Jalin Hyatt’s FIFTH receiving touchdown of the day ties it for the Vols. Amazing. pic.twitter.com/KuCFZGE89G

Hyatt also secured the longest touchdown catch of his career against the Tide when the Biletnikoff Winner caught a 78-yard bomb from Hooker in the early stages of the fourth quarter.

Hendon Hooker and Jalin Hyatt connect on a touchdown for the FOURTH time today ?

The Vols take the lead over Bama early in the fourth quarter, 42-35.

The 21-year-old’s five touchdown night set the Tennessee Football record for most reception touchdowns in a game and tied the SEC record (Devonta Smith in 2019).

The Biletnikoff Award is an incredible addition to Hyatt’s list of honors following his fantastic year. The wideout has been named The Athletic and CBS Sports’ All-America First Team, and he made the Associated Press and Coaches’ All-SEC First Team rosters.

Whether it was streaking down field, running screens, slant routes or disguised wheel routes, Hyatt was seemingly open 24/7 during Tennessee’s 10-2 season.

There has been no update on whether or not Hyatt will enter the 2023 NFL Draft or whether or not he will opt out of the Orange Bowl at the end of this month. If Hyatt ends up playing in Miami, the Vols star needs just 32 yards to set the Tennessee Football record for most receiving yards in a single-season. Robert Meachem currently holds the record for his 1,298-yard season in 2006.

The sixth-ranked Vols’ final game of the year will come against seventh-ranked Clemson in the Capital One Orange Bowl in Miami, Florida, on December 30.