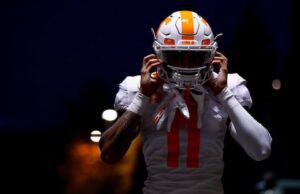 Tennessee wide receiver and 2022 Biletnikoff Award winner Jalin Hyatt has officially announced that he will be declaring for the 2023 NFL Draft and opting out of the Vols’ 2022 Capital One Orange Bowl game on Dec. 30 in Miami, Florida. The junior wide receiver made the announcement on social media on Wednesday afternoon.

“After careful consideration with my family, I have decided to begin preparing for the 2023 NFL Draft,” Hyatt said in his Instagram post. “Though I will not be playing in the Orange Bowl, I will be there in Miami to support my teammates like I always have.” 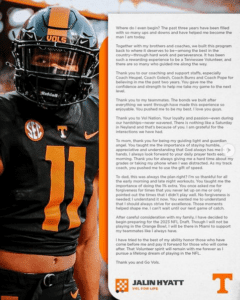 Since the end of the regular season, Hyatt has been a magnet to postseason college football awards and recognitions. In addition to becoming Tennessee’s first Biletnikoff winner in program history, eight different publications have all named the Irmo, South Carolina native a First Team All-America selection: AFCA, FWAA, Walter Camp, AP, Sporting News, ESPN, the Athletic, and CBS Sports/247Sports.

Hyatt was unbelievable for Tennessee this year – especially considering the Volunteers’ offense was without superstar wide receiver Cedric Tillman for the majority of the year. While defenses had every opportunity to lock in on Hyatt, the Tennessee wide receiver just continued to accel.

Hyatt finished the regular season with 1,267 yards on 67 receptions. The Dutch Fork High School product took to the college football scene like wildfire this year, impressing spectators with a dynamite 5-touchdown game against Alabama and a total of 11 touchdowns over a four-game span that included No. 25 LSU, No. 3 Alabama, and No. 19 Kentucky.

The decision by Jalin Hyatt to go ahead and focus on the build to his professional career is one that isn’t too unexpected. Hyatt’s stock has never been higher than it is right now when it comes to NFL Draft value. CBS Sports has Hyatt as the No. 6 wide receiver in the class with Cedric Tillman coming in as the No. 9 receiver on the board.

In three seasons at Tennessee, Jalin Hyatt ends his Volunteer career with 1,769 yards and 19 touchdowns on 108 receptions.