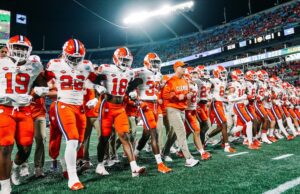 The Clemson Tigers. Photo via Clemson Football (@ClemsonFB) on Twitter.

On Sunday evening, just a few hours after the announcement that No. 7 Clemson would host No.  6 Tennessee in the Capital One Orange Bowl, 247Sports reported that Clemson quarterback DJ Uiagalelei was expected to enter the transfer portal.

Uiagalelei has been the Tigers’ starting quarterback all season but has struggled at times throughout. The former five-star prospect was benched during the ACC Championship game against North Carolina in favor of Texas native and freshman quarterback Cade Klubnik. The 6-foot-2 first-year quarterback came in and completed 20-of-24 passes for 279 yards, one touchdown, and no interceptions during the win.

Uiagalelei was originally listed as the No. 1 pro-style quarterback in the class of 2020 by 247Sports. The freshman Clemson quarterback eventually found two starts during the 2020 season and had 117 passing attempts, leading the way to him becoming the full-time Tigers’ starter in 2021. Uiagalelei led Clemson to a 9-3 regular season record with a 7-point win over Iowa State in the 2021 Cheez-It Bowl.

The up-and-down third-year Clemson quarterback led the Tigers to a 10-2 record in 2022 but struggled considerably against both South Carolina and North Carolina in the final two games of the season. Uiagalelei was benched in favor of Klubnik after just five passing attempts.

More from RTI: How Tennessee Has Fared in Orange Bowl Appearances

After Klubnik led the Tigers to the remainder of the ACC Championship on Saturday night, head coach Dabo Swinney named the freshman quarterback the starter moving forward.

Klubnik, the backup-turned-starter, is 31-of-46 on the year with 377 yards, two touchdowns, and one interception.

The news from Sunday night indicates that neither No. 6 Tennessee nor No. 7 Clemson will be with their starting regular-season quarterback with Hendon Hooker injured and DJ Uiagalelei as a backup and expected to move to the transfer portal.

It’s shaping up to be Joe Milton III and the Tennessee Volunteers taking on Cade Klubnik and the Clemson Tigers on Dec. 30 in Miami, Florida.