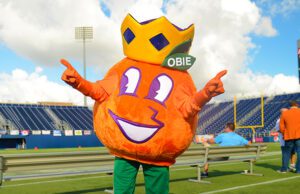 Photo via the Orange Bowl.

Both Clemson and Tennessee will be starting new quarterbacks for the Orange Bowl – although, for very different reasons.

Joe Milton III will start his fourth game at Tennessee during the Orange Bowl after starting quarterback Hendon Hooker went down with an ACL injury in the penultimate game of the regular season. Cade Klubnik, Clemson’s superstar freshman quarterback, will get his first start of the season after leading the Tigers to the ACC Championship and replacing former starter DJ Uiagalelei.

Despite not having a ton of experience at the collegiate level, Klubnik is an immensely talented quarterback for the Tigers. The 6-foot-2 freshman threw for 377 yards, two touchdowns, and one interception on 46 attempts this season while also rushing for 88 yards on 22 carries.

In comparison, Joe Milton threw for 573 yards and six touchdowns on 23 attempts as the backup to Hooker this year. Those numbers are not counting his 11-for-21, 147-yard, one-touchdown performance as the Vols’ starting quarterback against Vanderbilt.

Klubnik replaced Uiagalelei after just five passes against the Tar Heels in the ACC Championship game.

“Just like most of their team, he’s really talented—strong arm, strong release,” Banks said. “He’s played some reps. Obviously not the lion’s share the other kid (DJ Uiagalelei) did outside of the North Carolina game.”

Considering there isn’t a full-game tape of Klubnik as the starter to scout before the game, Tennessee is getting creative with their film studies before the big season-ending game.

“We went back and watched his high school film,” Banks said to the Knoxville media. “He’s a tremendous athlete, strong arm.”

While at Westlake High School in Austin, Texas, Klubnik became the No. 1 quarterback in the class of 2022 and was the top-ranked player from the state of Texas according to 247Sports. Klubnik has tremendous accuracy and great timing from the pocket.

“He’s talented,” Banks said. “I can see why he’s there and see why those guys are so high on him. We’ll have our hands full, but we’ve obviously played a ton of talented quarterbacks in this league, and he’s just the next guy up.”

No. 6 Tennessee will take on Cade Klubnik and No. 7 Clemson in the Capital One Orange Bowl in Dec. 30 from Miami, Florida.