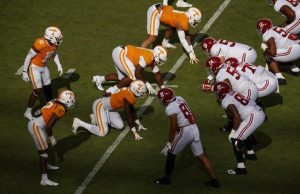 Tennessee vs Alabama from Knoxville. Photo By Kate Luffman/Tennessee Athletics.

Despite the placement’s initial unpopularity around the social media world, the decision was not necessarily uncommon as the AP Top 25 and USA Today Coaches Polls also had Alabama over Tennessee.

But it still begs the question of what went into that decision.

On the surface, Tennessee and Alabama have the exact same record. Tennessee also has a 52-49 head-to-head win over the Tide, which was originally thought of to be important for this kind of situation. So, shouldn’t that warrant Tennessee above Alabama if the two teams are going to be next to each other?

Not quite. Corrigan explained the decision on Tuesday night.

“The outlier would be the Tennessee loss to South Carolina as opposed to two close losses by Alabama,” Corrigan said via The Jackson Sun. “That was a determining factor there.”

Corrigan did acknowledge the importance of head-to-head matchups but also explained how valuable a full season of work is.

Shouldn’t that also be in Tennessee’s favor? Alabama has three ranked wins on the season: @ No. 20 Arkansas, vs No. 24 Mississippi State, @ No. 11 Ole Miss. (Texas, a team that Alabama beat, has slid up to No. 20 in the latest rankings.)

Alabama’s two losses came to Tennessee and LSU, two teams that have finished in the Top 15 of the latest rankings.

Tennessee also has two losses on the season to Georgia and South Carolina, who landed at No. 1 and No. 19, respectively, in the most recent playoff rankings.

Tennessee’s spot behind Alabama, at No. 7, has also squarely put them into a controversial spot in the bowl selection process as well.

The idea here is that with Georgia going to the College Football Playoffs, Alabama will now go to the Sugar Bowl, which takes the highest-ranked non-playoff team from the SEC. After the rankings on Tuesday, that’s Alabama. That also sets up Tennessee for a pretty routine spot in the Orange Bowl.

Despite that, though, No. 5 Ohio State is now possibly throwing a wrench into the situation by potentially being moved to the Orange Bowl, taking Tennessee’s spot. The eighth-ranked Penn State Nittany Lions would slide up and into the Rose Bowl spot in that situation.

It’s confusing and convoluted, no doubt. Rocky Top Insider’s Ryan Schumpert expertly broke it down on Wednesday, which you can find here.

One way or another, though, it has certainly been a wild 24 hours around the Tennessee Football program.