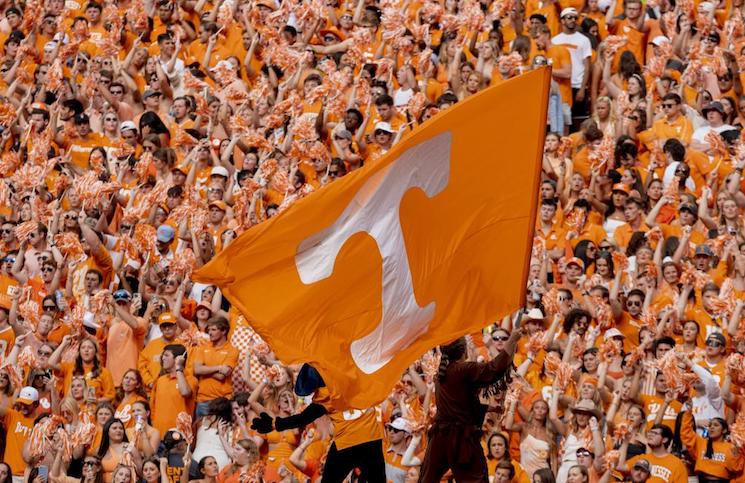 Tennessee football turned in its best season in two decades in 2022, posting a 11-2 (6-2 SEC) record and program building wins over rivals and SEC foes.

The Vols high-flying offense created tons of highlights and big plays, but today we look at the plays that flew under the radar but made all the difference in Tennessee’s resurgent season.

8. Heupel Gets Hyatt All Alone — Missouri

This statement applies to a lot of Tennessee touchdowns this season, but Josh Heupel deserves all the credit for this one.

With Missouri using a 10-0 run to pull within four points of Tennessee midway through the third quarter, Heupel hid Hyatt and slipped him out the weak side on a wheel route. Missouri never guarded him, Bru McCoy provided a good block and Hyatt strolled 68 yards for a touchdown.

The Vols outscored Missouri, 38-0, from that touchdown on and never broke another sweat.

Tennessee had the momentum and led by four points late in the first half against Pitt. The Panthers decided to be aggressive in the two-minute drill and it proved costly.

Tyler Baron strip sacked Kedon Slovis in the final 30 seconds of the half, leading to a 37-yard Chase McGrath field goal before halftime. Not only did the play give Tennessee good field position, but it ended Pitt quarterback Kedon Slovis’ day with a concussion.

In one of the few games Tennessee’s offense struggled, both the fumble and injury had huge repercussions on the game.

Tennessee edge rusher Tyler Baron showing off his relentless motor and heavy hands lining up at 1-Tech and coming away with a strip sack of Slovis. pic.twitter.com/7IgLiVihTj

6. Group Of Vols Stop Will Shipley On Fourth Down — Clemson

Clemson was starting to gain momentum midway through the third quarter of the Orange Bowl. The Tigers were on the move and leaning on a ground game that was churning out four yards at a time.

Dabo Swinney kept his offensive on the field on fourth-and-two in Tennessee territory while trailing by eight points. The Clemson coach kept it simple too, giving the ball to power running back Will Shipley.

The strategy had worked well in the second half and it took a gang of Tennessee defenders from keeping it from working again.

Aaron Beasley and Juwan Mitchell hit Shipley first but it looked like he would fall forward for the first down until Kamal Hadden pushed him back short of the sticks.

Clemson would never have the ball trailing by a possession again.

LSU rarely had momentum against Tennessee. After all, the Tigers fumbled the opening kickoff of the game and Tennessee won by 27 points.

But late in the first half, Tennessee’s lead was just 13 points and LSU had the ball on the two minute drill. Tennessee got off the field on third-and-long at midfield but Brian Kelly rolled the dice, keeping his offense on the field.

It proved a massive mistake. Tennessee brought the house, Byron Young got home quickly to sack Jayden Daniels and it was the Vols that added a field goal before intermission.

When Tennessee scored on the opening drive of the second half to double up LSU and extend its lead to 23 points, the game was all but over.

LSU goes for it on 4th down… and Jayden Daniels gets sacked by Byron Young #Vols pic.twitter.com/P3F6MyxJkP

It’s hard to remember, but Tennessee was limping into the locker room against Florida. The Gators led, 14-10, and Hendon Hooker was banged up as the Vols’ offense struggled.

Then, Hooker made one of the most impressive plays of his college career while leading a 99-yard touchdown drive.

Tennessee faced third-and-10 at its own 12-yard line when Hooker evade pressure, rolled left and fired a dot to Princeton Fant for 10 yards and the first down.

Ramel Keyton made a spectacular leaping catch a play later and Hoojer found McCoy for a touchdown eight plays later as the 99-yard two-minute drive gave Tennessee the lead and flipped the momentum.

People talk about the drive and Keyton’s catch, but rarely the third down play that made it possible.

Pitt was in complete control early against Tennessee. Already leading 10-0, Pitt was on the move again late in the first quarter.

That’s when Trevon Flowers made the play of his season, intercepting Slovis in the back of the end zone on a third down throw.

The play helped stabilize Tennessee on the road and sparked its best stretch of play in the contest.

Trevon Flowers has been named a Jim Thorpe Award semifinalst. The award is given to the best defensive back in college football. #Vols pic.twitter.com/hkOdwpp2pq

2. Thomas Punches The Ball Away From Anthony Richardson — Florida

The second half of the Tennessee-Florida game was a back-and-forth of both teams scoring touchdowns. The Vols would score to go up by 10 then the Gators would score to pull within three points.

It looked like the trend would continue early in the fourth quarter when Florida drove into the Tennessee red zone.

Omari Thomas had other ideas, punching the football out of Anthony Richardson’s hands and giving the ball back to the offense. The Vols drove down the field to score and lead by 17. While the score didn’t prove to the game — Florida had one more dramatic push left in them — it did drastically change the way the final 13 minutes were played.

1. Hooker To McCoy To Set Up McGrath — Alabama

The number one play on this list is probably the most talked about play and it’s still the most overlooked. Before Chase McGrath booted in a knuckle ball to bet Alabama, Hendon Hooker double clutched and Bru McCoy hauled in a contested 27- yard catch to set the stage for the game winning kick.

It was great pocket awareness by Hooker and a fantastic catch by McCoy to set up one of the most memorable kicks in program history.

Tennessee might have still won without the play, but they would have needed overtime to do it.