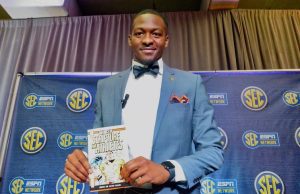 Tuesday night’s episode of SEC Now on ESPN brought out one of the more head-scratching hot takes to cross the media wire this college football season.

During the episode, SEC analyst and former Georgia lineman in the late 90s, Matt Stinchcomb, criticized Tennessee quarterback Hendon Hooker for a selfish nature inside of the Tennessee program. The segment on SEC Now featured Stinchcomb and SEC analyst Roman Harper doing a “presidential debate” regarding the MVP of the SEC as both sides made the case for their selection.

“Football, ultimately, is a team sport,” Stinchcomb said on Tuesday’s show. “Now Hendon Hooker wants to be the focal point. He wants to be the center of attention. He wants to be out in front. He’s like every other quarterback – it’s all about me. [Georgia tight end] Brock Bowers, he wants to make it about ‘us’. And that’s what’s more important.”

With the segment being set up in the way it was, the comment certainly could have been just a bit for the debate. But there’s a way to compliment Bowers without throwing absurdity in the direction of Hooker if so.

All throughout the season, Hooker’s teammates have given him credit for his ability to lead the team. So has the coaching staff. At seemingly every conversation that Hooker’s name comes up, something is said about his inclusivity, his work ethic, or his overall team leadership. There’s no question that Hooker wants to be the guy leading the pack. But it doesn’t seem to be from a selfish position. It seems to come from a leadership position.

“At about the halfway point last year, you saw him come into his own and start seeing himself as the man, the guy leading this team as opposed to the guy that was trying to figure it out, trying to figure out the best way to do it, how he leads this specific locker room, because it was his first year around all these guys,” quarterbacks coach Joey Halzle said about Hooker before Georgia. “People forget that with him being a senior, a sixth-year guy, that it was his first time around all these guys, so you still have to feel out the locker room and feel out how these guys need to be led and want to be led. So now, he’s completely taken that and ran it to the next level where now he can run it the way he sees fit, because the guys follow him because they know the way he works, the way he prepares and the way he performs on gameday. All of that goes together with him being able to take charge of this team.”

For Hooker, each game and each week is another step in the learning process to better himself as a communicating and effective leader on the team.

“I’ve grown just from learning,” Hooker said before the Georgia game. “Learning experiences and being put in different situations and knowing how to build relationships and knowing how to talk to different individuals in a way that will help them or motivate them to get what we need to get done and help them throughout the job. They help me with my job. It’s a two-way road from being a leader and communicating at a high level. You have to understand where people are coming from in different situations. Just having an understanding of my teammates and the family here at Tennessee has helped me elevate my leadership process.”

Roman Harper began the segment by selecting Tennessee quarterback Hendon Hooker as his SEC player of the year.

“The man who you want to have as MVP of this SEC is Hendon Hooker,” Harper said. “There’s no question about it. He plays the most important position for one of the top teams in all of the SEC.”