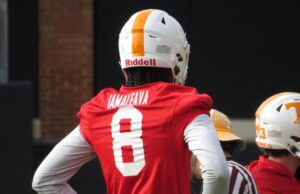 Despite having joined the Tennessee football program back in mid-December, Tennessee quarterback Nico Iamaleava is still making news on the recruiting trail as publications unveil their final rankings for the class of 2023.

On Monday afternoon, Rivals put out their final list with Iamaleava landing at the No. 2 overall spot from the class of 2023.

“There is no quarterback – maybe no player – as dynamic as Nico Iamaleava, who has such incredible tools that will be honed by Tennessee coach Josh Heupel and his staff to make him an even more dominant player,” Adam Gorney wrote for Rivals.

Additionally, On3 Sports also put out their final class of 2023 rankings late last week, with some big news to share.

On3 Sports’ final recruiting rankings of the year saw Iamaleava jump up to the No. 1 overall spot in the nation, passing Manning along the way.

“High-upside signal caller who may have the best physical tools among quarterbacks in the 2023 cycle,” On3 wrote in their scouting report of Iamaleava. “Has one of the stronger arms in the cycle, generating considerable velocity on his throws in camp settings.

All in all, Iamaleava ranks as a five-star top-two player in the class according to On3, 247 Sports, and Rivals.

ESPN, though, is a complete outlier.

Then look at ESPN, which has Hobbs rated at No. 166 nationally, the No. 22 defensive lineman in the class, and the No. 5 player from the state of North Carolina.

The range of 20-55 nationally is one thing. A range of 20-166 is completely different and indicates a definitive outlier at play.

There doesn’t seem to be a lot of people going to ESPN for recruiting news as is. The “worldwide leader in sports” clearly has a lot on their plate and isn’t giving a ton of priority access to the college football recruiting side of things.

On Tuesday morning, ESPN ranked Tennessee’s 2023 recruiting class at No. 15 overall. The Vols come in one spot above South Carolina and behind five other SEC teams including Texas A&M and Florida.