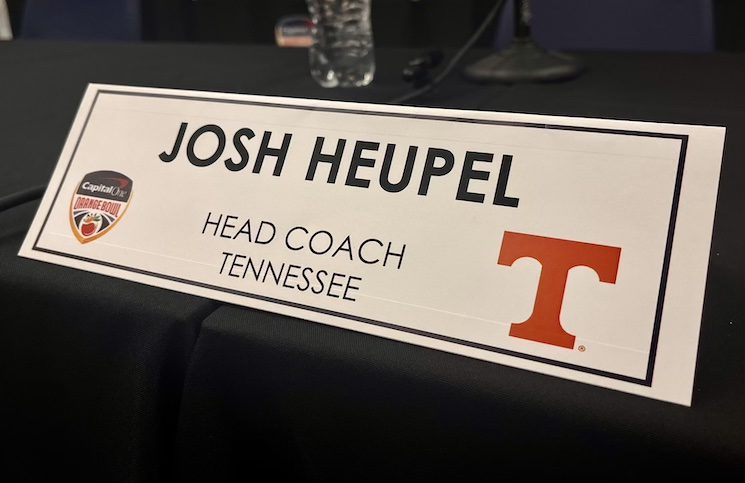 Tennessee head coach and Clemson head coach Dabo Swinney met with the media on Thursday morning for one final press conference ahead of the Orange Bowl.

Both discussed a wide range of topics on the bowl game, recruiting and the transfer portal, opt-outs and more.

Everything Heupel said during the press conference is below.

“Just want to say thank you to the Orange Bowl committee and South Florida. The hospitality for our program has been absolutely fantastic. It’s been a great week. Before we got down here, having played in it and coached in it before, I was able to relate to our players and staff what this week is all about and the opportunities that they were going to have to see South Florida and have a great week of experiences. You guys have rolled out the orange carpet and shown us a great week. We appreciate everything so much and are certainly looking forward to the football game. It’s been a long time since Tennessee has been here. Really proud of what this program has done in the last 23 months since our staff arrived. Really proud of our players. Playing a great opponent here tomorrow, and looking forward to that. We’ve seen a lot of the VFLs, former players, starting to make their way down here and I know our fan base is, too. It’s great to see all those former players show up, and I’m looking forward to going out and competing with our football team tomorrow.”

Question: “For Tim Banks, you recently added him; what’s his impact been for you this year as a defensive coordinator?”

HEUPEL: “Tim has been a phenomenal leader on the defensive side of the football. When we were going through the process of finding our defensive coordinator two years ago, looking for somebody that had experience that was a great leader, that was multiple in what he was able to do, was relationship driven and had a great ability to teach, for all the things that we encountered when we first arrived on campus, his steadiness, his leadership, his ability to gain buy-in from the guys around him, that’s staff members that were coming in. Not everybody had worked together. There was some common threads where there were some previous relationships there. But then getting all of our players to buy in to what we’re doing. He’s done nothing but do a great job of continuing to grow what we’re doing on that side of the football, and you can see that in the way our guys play for him.”

Question: “Josh, you’ve got three players opting out, all good players. You’ve got your coordinators gone and you’ve recently had a quarterback change. In a regular season you may have one of those changes in a given week. To have all of them at once, how is the challenge different for you as a coach, and how do you navigate all those changes within one game?”

HEUPEL: “Yeah, I think at the end of the day that’s kind of the landscape of what happens at times inside your program when you’re having success and during the course of bowl season.

“You can see that across the country. The unique thing is you have a couple extra weeks to prepare and plan for those situations. You’re not dealing with it in a seven-day span. We lost some really good players. I think that provides unique opportunity. That’s the tough thing and the great thing about college football is that essentially a quarter of your roster is graduating every single year. With that provides new opportunity to go make plays because you’ve got more snaps on the football field. It provides opportunities in leadership. It’s the great thing about college football. You’re essentially building your roster and your football team every single January, and that’s always true, but I think in the landscape of college football, it’s certainly true, and more evident and more prevalent now with the transfer portal, too.”

Question: “How long did it take for you guys to get over that disappointment, and what were you able to do to keep them motivated and make sure that this game was important to them?”

HEUPEL: “Yeah, we had to reset the following week, and I think you guys played the week after, as well.”

“The only reason we’ve gotten to this point, these players didn’t come into this and just inherit it. They’ve worked for it from the moment that we got there on campus. That’s the competitive nature. It’s their connection to one another. Our players were able to reset. Was there disappointment? Absolutely, in that moment, and you could feel it in the building when they came in the following day, on Monday.

“But they were able to reset. This is an important game to our football team. We talk about finishing. We talk about legacy. This group that is graduating and heading on, this is a way to finish it and leave a strong legacy at Tennessee. At the same time, I think bowl games in this era are also about kicking off the following season. For all those things, our kids’ focus and energy out at practice has been fantastic. I think it’s important that you enjoy the bowl experience while you’re here in South Florida, but when you’re in meetings and on the practice field, you’ve got to be dialed in and locked in. I really like how our guys have handled the week up until this point.”

Question: “What have you seen from Joe Milton in embracing this opportunity, and how important is Friday’s performance in terms of the quarterback competition to come?”

HEUPEL: “Yeah, Friday is important because this is the last game for this football team this season. It’s the end of that culmination. We’re going to have competition at every position next spring in our program. We’ve got to go out and earn it and take it every single day, and that’s true at the quarterback position, as well. Everybody inside that room understands and knows.

“Joe has been great all season long. I think it’s a unique story in today’s atmosphere inside of college football that someone is that talented and has had some success at the quarterback position, ends up being moved to the No. 2 spot, sees that there’s value in the staff cares about me, the staff can help develop me, I can perform inside of this offense, and my traits fit this, and I’ve got to stay the course because I need to grow. That can be mentally, it can be emotionally, it can be fundamentally.

“I think in today’s world for a young man to see that and be able to say, hey, I’m going to sit here, I’m going to compete every single day with Hendon or whoever that young man might be and to handle it the right way is a great story. He’s prepared like he’s going to be the starter, all off-season, all training camp, all season long. He’s continued to grow.

“We’re playing a great opponent, great defense. It’s going to take all 11 to go out there and perform at a high level tomorrow. But I’m excited to see Joe go compete, man, and excited for this opportunity for him.”

Question: “How much of an adjustment is it for you to go back to calling plays?”

HEUPEL: “It’s not. Like for us as a staff, we go through that process every single week. We go through it on game day.

Question: “Have you started the process of interviewing for an offensive coordinator?”

Question: “Just wanted to get your reaction when you turn on bowl games and you see these tributes to Mike Leach, you saw the one last night, the penalty, and a couple coaches have worn shirts. Just your reaction and what you think each time you see it, and also if you have anything planned tomorrow to kind of honor him.”

HEUPEL: “Yeah, Mike was instrumental in my opportunity to play at a high level, to coach at a high level. He’s the guy that gave me my start. He meant so much to so many people around the country inside of college football and outside of it.

“I think he’s really unique in that way that you truly got a chance to see how his mind worked and operated. He had so many passions outside of the game, as well. We lost somebody that made college football extremely interesting and changed the landscape of it. At that time, college football was played in a box around a lot of the country, and his vision of playing out in space is how college football is played today.”

Question: “Is this a full-circle moment for you? I know you played in the 2001 Orange Bowl; what’s that experience that you had back then compared to today as a coach?”

HEUPEL: “Yeah, my experience down here, great memories. Got a bunch of teammates that are actually going to be down here. A couple of them came into town last night, and will have an opportunity to hopefully catch up with them today, but see them on the field on game day, too. Great memories from my playing career.

“When I think back to my days at Oklahoma and some of the things that we accomplished, your mind obviously comes right here to this stadium and this bowl game. Dabo was talking about just the bowl game experience in general. These are opportunities and memories that you remember forever, and I’ve tried to share that with our football team, having played in this game, just what this game means, the exposure that you have, the opportunity that you have. As you get further away from it, your bowl experience is something that you’re going to come back to when you’re with your brothers.”

Question: “Can you talk about the impact in recruiting a game like this, a stage like this can have for your program?”

HEUPEL: “Yeah, for sure. It’s another opportunity for kids across the entire country to see the brand of football that you’re playing, the culture that you have by the way that you compete together.

“Throughout the course of this season, we’ve been able to show the proof of what this program is becoming and what’s going on inside of our building and continuing to take steps forward to continuing to compete for championships. When we first arrived, you were talking about it. A year ago they saw a little bit of proof of it. They get a chance to see a whole lot more of who we are and what we’re about and the exciting brand of football that we’re going to play.

“We’re going to be extremely aggressive on offense, but we’re going to have that same mentality and attitude on the defensive side of the ball and play that way on special teams, too. This is a great opportunity for Tennessee’s brand, its logo, the university to be in the forefront of the country, playing in one of the iconic bowl games in college football.”

Question: “How much has Coach Halzle’s workload changed? How much has been added to his workload with Alex Golesh’s departure and what does that entail?”

HEUPEL: “As much as anything, on the scripting side of it, but how we’ve operated and functioned from how we design our starters for each drive, communication, obviously Alex’s voice won’t be there on game day, but the collaboration of all of us, the way we communicate in between plays, to have been in the middle of all of it, Joey has been, Glen has been, I certainly have been, too. We’ll miss Alex. Alex will do a great job at USF. But the majority of our group and how we’ve operated just really hasn’t changed that much.”