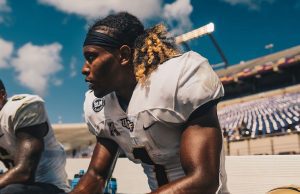 Former UCF wide receiver Jaylon Robinson is back in the transfer portal after spending the 2022-2023 football season with Lane Kiffin and the Ole Miss Rebels.

Robinson is now looking for his fourth collegiate program in five seasons.

Jaylon Robinson began his career as a three-star prospect from Fort Worth, Texas in the 2018 recruiting class. Robinson committed to Oklahoma and played there for one year before hitting the transfer portal.

Robinson’s next path took him under the wing of now-Tennessee head coach Josh Heupel at the University of Central Florida. Robinson spent two years with the Knights program but was only under Heupel during his first season in 2020. Heupel’s first season at Tennessee was during the 2021 season.

While he was connected with Josh Heupel during the 2020 season, Robinson saw – by far – his most productive season as a college football player. Robinson went off for 979 yards and six touchdowns on 55 receptions in the 10 games of the COVID-shortened season.

After the 2021 season, though, the 5-foot-9, 180-pounder receiver hopped back into the portal. Robinson would eventually emerge as an Ole Miss transfer commit to link up with Lane Kiffin but did have words to say about Tennessee, who clearly contacted and recruited him as he was making his decision.

“Every school threw a punch at me,” Robinson said in May 2022 after committing to the Rebels. “TCU did being the hometown school. Tennessee is where my old coaches are at. Those bonds are something I feel like will never break, but I felt like I had to take the next step forward for myself. Tennessee was probably the hardest because I think everyone thought I would go there just because I was familiar with the coaching staff because of our good bond. I wanted to try something new and push myself to be. I knew that system but wanted do something different.”

Robinson didn’t reconnect with his old coaches (Heupel, OC Alex Golesh) because he wanted to try something new and push himself in a different direction. But after things didn’t work out in Oxford, maybe reuniting with familiar faces could prove to be beneficial for the Texas native.

Jaylon Robinson only found 29 yards on five receptions in eight games during the 2022 season with Ole Miss.

In addition to Cedric Tillman and Jalin Hyatt declaring for the NFL Draft, Tennessee has seen three receivers also enter the transfer portal this year – Jimmy Holiday, Jimmy Calloway, and Walker Merrill. Tennessee will get Bru McCoy and Ramel Keyton back, along with Squirrel White, a promising freshman speedster from the 2022 season. Tennessee also has a slew of young, talented players that are ready to make a name for themselves, like Chas Nimrod, Kaleb Webb, and Nathan Leacock.