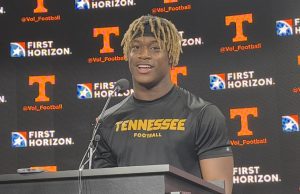 Just about two weeks after committing to Stanford University out of the transfer portal, former Tennessee running back Justin Williams-Thomas has seemingly found a new home instead.

According to a social media post from Williams-Thomas on Sunday night, the former Vol is now heading to Cal – Berkeley.

“ALL GLORY TO GOD,” Williams-Thomas said on Twitter with a praying hands emoji.

ALL GLORY TO GOD? pic.twitter.com/UqUA9b9hsX

More from RTI: Where Tennessee Football Lands in Way-Too-Early Rankings

The 6-foot, 210-pound running back originally committed to Tennessee on Dec. 15, 2021, which was the start of the early signing period last year. Williams-Thomas, a native of Dallas, Georgia, and East Paulding High School, tallied 37 yards on 11 rushing attempts during his freshman season in Knoxville.

Williams-Thomas hit the transfer portal on Dec. 5, the day it officially opened. On Dec. 27, Williams-Thomas sent a tweet announcing his commitment to Stanford but deleted the tweet sometime after.

The former Volunteer now looks to be headed to one of Stanford’s rivals in Cal.

Williams-Thomas will have four years of eligibility remaining as the speedy and well-sized running back finds his footing with his new home.

As far as Tennessee goes, the Vols look to be in a great position entering the 2023 season. Tennessee will return its top three running backs next year in Jabari Small, Jaylen Wright, and Dylan Sampson.

While Tennessee won’t have Hendon Hooker’s dynamic ability running the ball, Joe Milton III is still a capable dual-threat quarterback with his size and strength.