Tennessee missed five of its final six three-pointers as Arizona pulled away late to secure a, 75-70, victory over the sixth-ranked Vols Saturday night in Tucson.

Tennessee’s offense has struggled to find scoring from its big men in the last two seasons. At Arizona, the Vols got the interior scoring Rick Barnes has been looking for.

Olivier Nkamhoua and Uros Plavsic both came out hot for Tennessee, combing for 14 first half points on just eight shots. Nkamhoua stretched the court with a pair of threes while Plavsic scored tough baskets inside but earned a technical foul after one early basket.

No single Vol big man had a massive night due in part to continuous foul trouble (more on that in a bit) but combined they had strong numbers.

Jonas Aidoo and Tobe Awaka combined for six points and while Plavsic slowed down in the second half, Nkamhoua continued to thrive ending the game with 16 points on 12 shots.

The interior scoring helped get Tennessee shooters open and the Vols made shots at a higher rate than they frequently have this season. Tennessee’s big men passed the ball well, combing for six assists including five from Nkamhoua.

More From RTI: Josiah-Jordan James Out Against Arizona

Tennessee brought its physical man-to-man defense on the road for the first time on the season and as life often is on the road the Vols found themselves on the wrong end of a foul divide.

Five Tennessee players totaled two first half fouls including all four big men and Zakai Zeigler. Zeigler’s first foul was a charge in transition— the first of three first half charge calls on Tennessee.

The Vols doubled Arizona up in first half fouls (12 to six) while the Wildcats shot 12 first half free throws to Tennessee’s zero.

One area Tennessee has exceeded expectations this season is on the glass where they’ve developed into one of the nation’s best offensive rebounding teams.

Arizona’s fantastic front court put that to the test and the Wildcats got the upper hand, out rebounding Tennessee 38-30.

The Vols have excelled on the offensive glass and did have some success there, tallying nine offensive rebounds.

With perimeter jumpers not falling in the second half, the lack of success scoring on second chance opportunities cost Tennessee.

Courtney Ramey hit a transition three to extend Arizona’s lead to a game-high 10 points with 7:22 left in the game. It felt like a dagger as the Wildcats slowly growing lead finally reached double-digits.

Then Arizona point guard Kerr Krissa picked up a technical foul celebrating on the bench. Zakai Zeigler hit the two free throws then Santiago Vescovi made a sweet layup for a four point possession that cut Arizona’s lead to six.

That started a run for Tennessee that included Zeigler and Tyreke Key triples and saw the Vols pull within one point in the game’s final three minutes.

Tennessee twice had the ball with a chance to take the lead with a basket. Both times the Vols missed open jump shots. A Pelle Larsson and-one and an Oumar Ballo interior basket pushed Arizona’s lead back to six in the final two minutes and all but won the game.

The Krissa technical changed the dynamic of the game and opened up a window for Tennessee to climb back in the game. Tennessee couldn’t make enough shots to make it matter. 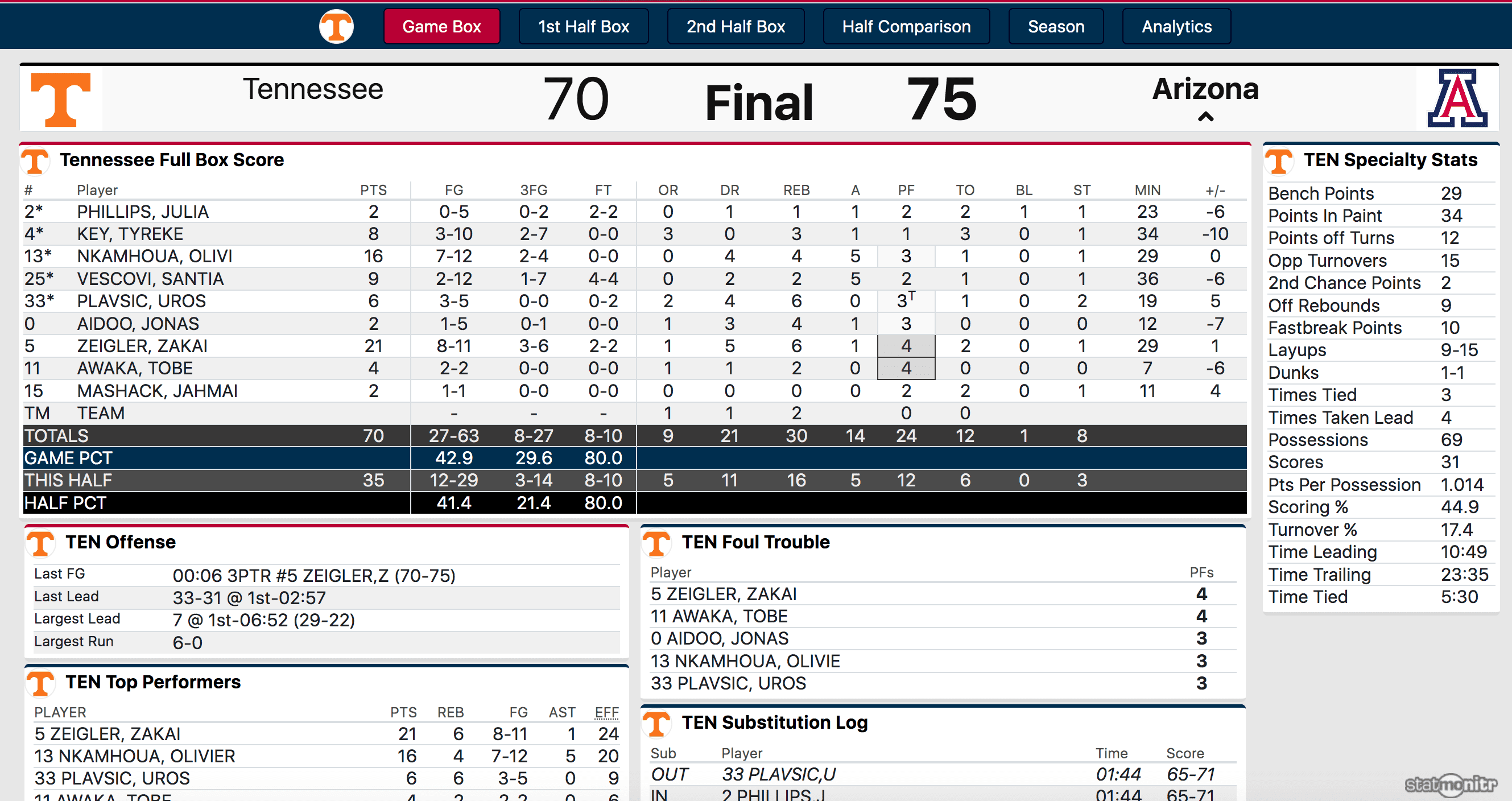