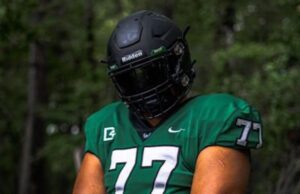 One of the top four-star players in the class of 2024, offensive tackle Kam Pringle, is set to make his official collegiate decision later in the month of January.

Pringle kicked off the week Monday by revealing that he would be announcing his college decision on Sunday, Jan. 22, in the Woodland High School (S.C.) gymnasium.

According to 247 Sports’ composite rankings, Pringle is the No. 1 offensive tackle in the class of 2024, the No. 46 player overall, and the No. 1 player from the state of South Carolina. The 6-foot-7, 330-pound lineman is a difference-maker on the field that has already collected more than 20 scholarship offers.

While both of the 247 Sports Crystal Ball predictions do lean the way of South Carolina, one of those predictions will be nearly a year old by the time that Pringle does announce his decision. Regardless, though, South Carolina and head coach Shane Beamer do look to be in a solid position with the 2024 lineman.

Pringle visited Tennessee unofficially a handful of times during the back half of 2022, including two visits over the summer and one visit for the Florida game in Knoxville last September.

The Vols’ first commitment to the class came from four-star edge rusher/athlete Jonathan Echols back on July 4, 2022, which was then followed by in-state three-star defensive lineman Carson Gentle just a few weeks later. Tennessee then received a commitment in October from Nashville native and four-star cornerback Kaleb Beasley – the second-ranked player from the state of Tennessee in the class.

While it doesn’t initially seem likely that Kam Pringle will commit to Tennessee on Jan. 22, it is certainly one to watch for the remainder of the month.