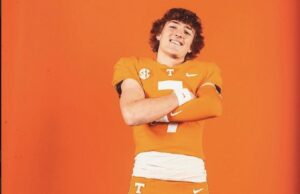 Four-star class of 2025 quarterback Cutter Boley posted a new video on Tuesday from his recent visit to Knoxville. The highly-touted prospect was in town for Tennessee’s Junior Day recruiting event and seemed to have a great time based on the video.

Boley’s video includes footage of the Tennessee-Kentucky basketball game Saturday, Chris Lofton’s jersey retirement, gear selection with some of the other players in the building, a photo shoot, and much more.

While posting the video to Twitter, Boley also tagged two in-state Tennessee targets, Boo Carter and Martels Carter Jr., not related. Both players are defensive backs from Brainerd HS in the Chattanooga area.

Cutter Boley is a 6-foot-5, 203-pound quarterback from Lexington Christian Academy in Lexington, Kentucky. That academy is only 173 miles away from the University of Tennessee.

According to 247 Sports composite rankings, Boley is the No. 54 recruit in the class of 2025, the No. 4 quarterback in the class, and the top-ranked player from the state of Kentucky. Boley is also a consensus four-star prospect according to Rivals, 247 Sports, and On3 Sports.

With 18 scholarship offers so far, Boley has some powerhouse programs in contact with him: Alabama, Florida State, Michigan, Ole Miss, Oregon, Penn State, Kentucky, Texas A&M, Miami, and Tennessee – to name a few. However, the two programs closest to Boley seem to be in the lead very, very early on.

According to On3 Sports Recruiting Prediction Machine, Kentucky currently leads the way for Boley’s recruitment at 37.4 percent. Tennessee is right behind the Wildcats, though, at 27.3 percent.

Michigan follows Tennessee at 14.2 percent and Ole Miss rounds out the Top 4 at 4.2 percent.

Prior to his sophomore year of high school, Boley attended Hodgenville LaRue County in central Kentucky.

According to 247’s Gabe Brooks, Boley is also a basketball player and a track & field competitor. During his freshman season at LaRue County in 2021, Boley threw for 1,391 yards and 11 touchdowns on 83-of-165 passing. The big-bodied quarterback also ran for 245 yards and six touchdown scores on the ground.