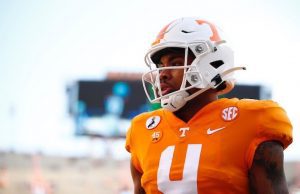 Tennessee WR Cedric Tillman is one of four Vol players to be invited to the 2022-2023 Reese’s Senior Bowl. Photo by Tennessee Athletics.

Tennessee’s coaching staff delivered the invitations this week, which were filled with an official Senior Bowl hat and the invitation itself. The Vols’ social media team posted the reaction videos to Twitter on Wednesday.

Hendon Hooker’s Heisman-esque season was cut short in the penultimate game of the regular season against South Carolina with an ACL injury. However, prior to that injury, Hooker was playing as good of, if not better, football than anyone in the country. The second-year Tennessee quarterback finished the season third in the SEC in passing yards (3,151), first in completion percentage (69.61 percent), second in passing touchdowns (34), first in quarterback rating (175.51), and is tied for the fewest interceptions thrown among quarterbacks in the conference (2).

Hooker also landed as a Walter Camp Player of the Year finalist on Wednesday.

Tillman, on the other hand, has also been dealing with frequent injury concerns throughout his final season in Knoxville. The fifth-year Tennessee senior started the Vols’ first three games but suffered an ankle injury against Akron early on. That would cause Tillman to miss the next four games for Tennessee. Tillman did return for back-to-back games against Kentucky and Georgia, but missed the final two games of the season against Missouri and Vanderbilt.

Still, though, Tillman was productive when he was on the field and clearly was a favorite target of Hooker. Tillman finished the season with 417 yards on 37 receptions. He also added in three touchdown receptions this season, including the go-ahead touchdown score against Pittsburgh in week two.

Hendon Hooker to Cedric Tillman for an OVERTIME touchdown!

Darnell Wright has been a monster protecting the far right side of the offensive line this season. Do you remember hearing much about superstar defensive lineman Will Anderson during the Alabama game? No? That’s because of Darnell Wright.

The 6-foot-6, 335-pound senior offensive lineman has been named the SEC Offensive Lineman of the Week twice this season, each coming in massive Top 20 games: No. 3 Alabama on Oct. 15 and No. 19 Kentucky on Oct. 29. Wright has also been named a 2022 Rotary Lombardi Award semifinalist.

And, lastly, Byron Young has been a talented playmaker in just his second season with the Tennessee program.

Young leads Tennessee with five sacks on the year, dropping the opposing quarterback for a total of 32 yards behind the line of scrimmage. The second-year Tennessee edge rusher also has the second-most tackles out of any defensive lineman on the Tennessee team.

All three players eventually went on to be drafted in the 6th round or higher in the 2022 NFL Draft.