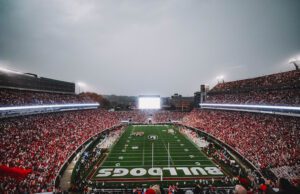 A tragic situation is unfolding in Athens as a University of Georgia football player and recruiting staff member passed away in a car crash early Sunday morning.

The reports state that Georgia redshirt-sophomore offensive lineman Devin Willock and staff member Chandler LeCroy have died in the accident.

Willock, a 20-year-old from New Milford, New Jersey, participated in Georgia’s National Championship victory less than one week ago this past Monday. Willock played in all 15 of Georgia’s games this season and even found a start at right guard against Tennessee in November.

According to Jordan Hill of Dawgs247, “Willock died on the scene as a result of his injuries.” Additionally, the report states that “LeCroy was transported to a local hospital, where she died as a result of her injuries.”

The University of Georgia released a statement to the media on Sunday morning:

“The entire Georgia family is devastated by the tragic loss of football student-athlete Devin Willock and football staff member Chandler LeCroy. Two other members of the football program were injured in the accident. They are both in stable condition, and we will continue to monitor their status with medical personnel.

“Devin and Chandler were two special people who meant so much to the University of Georgia, our football program and our athletic department. We ask that everyone keep their families in your prayers during this very difficult time.

“The UGA Athletic Association will work with our medical team as well as our mental health and performance personnel to make sure we are providing the best support possible for our staff and student-athletes who are processing this grief. We can provide no further comment at this time but ask that everyone continue to keep those involved in your prayers.”

According to Dawgs247 via Athens-Clarke County Police Department, “police responded to a single-vehicle crash in the 900 block of Barnett Shoals Road at approximately 2:45 a.m. Sunday morning. Initial investigation indicated that a 2021 Ford Expedition was traveling southbound in the outside lane of Barnett Shoals Road when the vehicle left the roadway and struck two power poles and several trees.”

Georgia head coach Kirby Smart has made a statement on the tragedy:

“We are all heartbroken and devastated with the loss of Devin Willock and Chandler LeCroy. Devin was an outstanding young man in every way. He was always smiling, was a great teammate and a joy to coach. Chandler was a valuable member of our football staff and brought an incredible attitude and energy every single day. We grieve with their families for this tragic loss and will support them in every way possible.”

The following tweet from Sam Kramer was tweeted out just about eight hours prior to the car accident.

Rest in peace to Devin Willock and Chandler LeCroy.

Special thank u to @DevinWillock for taking time for my grandson when he didn’t have to. U went out of ur way to make him feel special and U made his day!! Good luck next year! Go Dawgs! pic.twitter.com/3pgfXAMBFQ

RIP this morning we lost two beautiful souls in a deadly car wreck. Rest in peace Devin Willock and Chandler Lecroy. Prayers up to their families and the UGA community. pic.twitter.com/DJhdkZe2oM