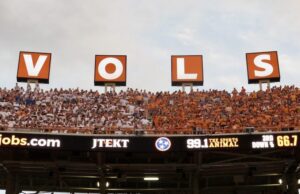 One of the top cornerbacks in the class of 2024, Jayden “Jaymoney” Lewis, officially announced his top six list on Monday afternoon.

The list from Lewis on Twitter includes Tennessee, Florida State, South Carolina, Arkansas, Ole Miss, and Auburn. The list leans very heavily into the SEC with the Seminoles also jumping into the mix.

Jayden Lewis is a consensus four-star prospect from 247 Sports, Rivals, ESPN Recruiting, and On3 Sports. According to 247’s rankings, Lewis lands as the No. 176 player in the class, the No. 14 cornerback in the class, and the No. 12 player from the state of Alabama.

Lewis currently plays ball for Anniston High School in Anniston, Alabama. The 6-foot, 175-pound defensive back also posted a sub-11-second 100-meter dash and a 22.04 200-meter dash for his high school’s track team back in May 2022.

Tennessee has been in contact with Lewis for quite some time now. According to 247Sports, Josh Heupel and Tennessee first offered Lewis a scholarship on Dec. 1, 2021, which was followed by an unofficial visit to Knoxville just a few months later in late March. Lewis did attend a Tennessee camp back in June as well.

According to On3 Sports’ recruiting prediction machine, Auburn and newly appointed head coach Hugh Freeze do potentially look to be in the lead with 56.5 percent of the prediction. Tennessee lands at the second spot with a 13.3 percent chance, followed by Ole Miss at 11.4 percent and South Carolina at 9.5 percent. Lewis has no 247 Crystal Ball predictions set, either.

Tennessee also has a commitment from four-star cornerback Kaleb Beasley, who is a very highly-rated defensive back out of Nashville’s Lipscomb Academy in the class of 2024.