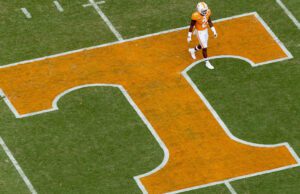 A highly-touted interior offensive lineman and Georgia native from the class of 2023, Keyshawn Blackstock, has officially dropped a Top 5 for his recruitment this week.

The Covington, Georgia native played one year at Coffeyville Community College in Kansas and will have three years of eligibility remaining. Blackstock has clearly been on the rise as he now sits as a four-star prospect according to 247Sports Composite JUCO rankings. Additionally, according to the same rankings, Blackstock lists as the No. 4 overall JUCO player and the No. 1 JUCO interior offensive lineman in the country.

More from RTI: Tennessee Beats Out Alabama For Four-Star Linebacker

Blackstock’s stock has been red-hot this fall. Since early September, the JUCO prospect has racked up 46 scholarship offers according to 247, including programs such as Auburn, Mississippi State, Penn State, Tennessee, Florida, Nebraska, Jackson State, Oklahoma, South Carolina, Florida State, and Cal.

The 6-foot-5, 315-pounder first took an official visit to the Gamecocks’ program on Nov. 18, just before the weekend of the Tennessee game in Columbia.

Blackstock and Coffeyville were most recently bounced from the Division I NJCAA playoffs during a loss to Hutchinson C.C. by a score of 38-7. Interestingly enough, Tennessee recently gained a commitment from 6-foot-6, 345-pound Hutchinson C.C. offensive lineman Larry Johnson III, who is not yet ranked in the class. Johnson committed to Tennessee on the 7th of December.

Tennessee offensive line coach Glen Elarbee has had immediate success at getting Tennessee players shots in the NFL. Former lineman Cade Mays was a sixth-round selection by the Carolina Panthers during the 2022 NFL Draft, and offensive lineman Darnell Wright is projected as a second-round pick in the 2023 NFL Draft. Additionally, Tennessee lineman Jerome Carvin looks to be projected as a fifth-round pick in this year’s NFL Draft.