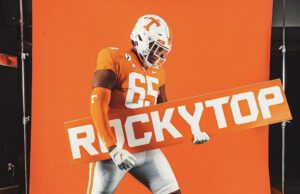 The third-ranked player from the transfer portal, Ajani Cornelius, is closing in on his commitment date in the very near future.

The former Rhode Island offensive tackle announced on Monday morning that he will be committing on Wednesday, Dec. 21, which is also the start of the early signing period.

Ajani Cornelius is the third-ranked player out of the transfer portal with a 96.00 rating according to On3 Sports. Despite helping lead his high school team to back-to-back state championships in 2018 and 2019, the 6-foot-4, 315-pound tackle began his career as an unranked player with no power five offers in the class of 2020. Cornelius took his talents to Rhode Island where he eventually redshirted his first year before starting all 11 games at right tackle in 2021.

Cornelius then followed that up with a terrific redshirt-sophomore season in 2022 with starts in all 11 games once again. The Harlem, New York native also was named a First Team All-CAA selection this year. Cornelius also has three years of eligibility left due to the NCAA COVID relief rules.

Ajani Cornelius will be choosing between Nebraska, Oregon, Tennessee, and Ohio State for his decision. Cornelius has visited all four schools since entering the transfer portal, with the two most recent being Tennessee this past Friday and Ohio State on Saturday.

One of the major selling points for Tennessee is that their current right tackle, Darnell Wright, is heading to the NFL this offseason. Wright has been a productive monster for Tennessee this season and has even worked his way into second-round NFL Draft projections. While Tennessee does have other solid tackles that will be in competition for that spot, Cornelius could come into a fortunate situation in Knoxville.

Tennessee offensive line coach Glen Elarbee is tracking well regarding getting players to the NFL, too. Elarbee helped Cade Mays become a sixth-round pick last year and could put both Wright and Jerome Carvin into the league this year.

Ajani Cornelius will make his collegiate commitment this upcoming Wednesday at 6:00 p.m. ET.