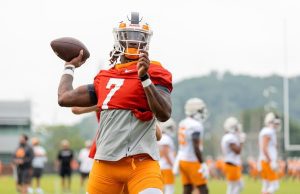 How does Vols quarterback Joe Milton III spend his Saturday mornings? He works.

Just about half an hour before noon on Saturday, Ekeler posted a video of Milton working out on the indoor practice field. The quick nine-second video shows Milton tossing what looks to be around a 45-yard pass to a receiver in the endzone.

There’s a lot on Milton’s plate this offseason as he prepares to take over – or, take back, really – the starting quarterback position for the Tennessee Volunteers.

When he first arrived at Tennessee as a transfer in 2021, Milton was named the starting quarterback of Josh Heupel’s first Tennessee team. The former Michigan signal caller started the Vols’ first two games but was sidelined after that due to an injury. Hendon Hooker took the starting quarterback job and didn’t give it up for the next two years until an ACL injury would send Milton back in as Tennessee’s starter in late 2022.

Milton ended the Vols’ 11-2 season as the starting quarterback in Tennessee’s final two games. Against Vanderbilt, on the road and in the rain, Tennessee didn’t ask Milton to do too much. That game eventually turned into a 56-0 venting session of a football game for the Volunteers.

The next game, though, proved that Milton had significantly improved from his time as the starter in 2021. Facing off against No. 7 Clemson in the Orange Bowl, Milton finished the MVP-winning game 19-of-28 for 251 yards and three touchdowns. Milton was solid all night as he worked through some dry spells en route to an impressive performance to close the season.

With Hendon Hooker heading to the NFL Draft, Milton believes that his time is now.

Joe Milton wasn’t the only Tennessee quarterback putting in work to start the weekend, though.

On Friday night in Hawaii, during the 2023 Polynesian Bowl, freshman early enrollee quarterback Nico Iamaleava played in his final high school-level game. Iamaleava was strong during his one half of work in the all-star game, throwing for more than 180 yards and a touchdown in just two quarters of action.

With two strong talents at Tennessee – the No. 1 2023 recruit with Nico Iamaleava and a five-year experienced veteran with Joe Milton – the offseason should provide plenty of interesting storylines until Tennessee names a starter officially in the fall.