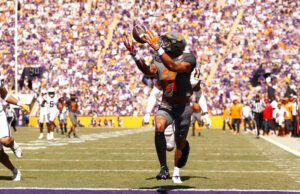 After Tennessee wide receiver Jalin Hyatt made the announcement that he would be opting out of the 2022 Orange Bowl to prepare for the NFL Draft, the South Carolina native’s name has been popping up in NFL mock drafts all week.

Hyatt won the 2022 Biletnikoff Award as the college football season’s outstanding FBS receiver and also was tied as the nation’s leader in receiving touchdowns with 15 on the season.

“This might feel a bit high for Hyatt, who burst onto the scene in 2022 to tie for the national lead in touchdown catches (15) and win the Biletnikoff Award, but one must never underestimate the NFL’s collective need for speed at the receiver position (and if/when he runs his 40, his stock will only rise),” Kelly wrote.

Hyatt would also reunite with former Tennessee teammate Joshua Palmer, who has been a wide receiver for the Chargers since the 2021 season. The two spent the shortened 2020 season together in Knoxville before Palmer was taken in the 3rd round with the 77th overall pick in the 2021 NFL Draft.

“The former Volunteers star is similar in some ways to Will Fuller in that he’ll have to develop a more diverse route tree in the NFL, but he brings high-end, game-breaking speed to threaten defenses vertically,” Kelly continued on to write. “That field-tilting gravity is exactly what’s missing in the Chargers’ pass-catching corps.”

In his final season at Tennessee, Hyatt burst on the scene like wildfire to the tune of 1,267 yards and 15 touchdowns on 67 receptions.

In a mock draft that was done by Pro Football Network last Monday, Hyatt was mocked as the No. 56 overall pick to the Chicago Bears – a team that also recently drafted a Tennessee wide receiver with Velus Jones Jr during the 2022 NFL Draft.

While Hyatt still looks to be settling into a consistent spot on the mock drafts, it’s certainly shaping out that the skilled Tennessee receiver looks to be a second-round draft pick at worst.