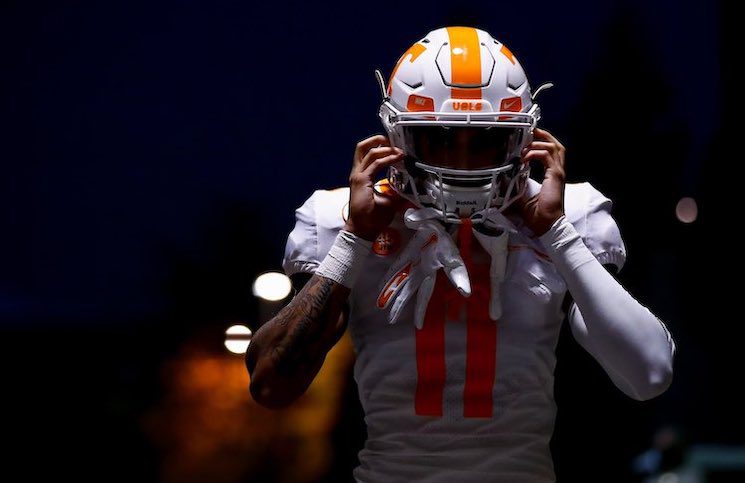 Tennessee wide receiver Jalin Hyatt has been racking up the postseason awards following his historic junior season as a Vol.

Hyatt won the prestigious Biletnikoff Award last Thursday, beating out Ohio State’s Marvin Harrison Jr. and Iowa State’s Xavier Hutchinson for the award. But the Biletnikoff, while the highlight, is far from all Hyatt has received since the regular season’s conclusion.

Hyatt has earned a spot on a staggering seven different All-America First Teams. Ranging from the Walter Camp to the Sporting News All-America First team, the explosive wideout is getting quite the recognition for his 2022 campaign.

Below is a list of all Hyatt’s accolades thus far.

The most recent recognition for Hyatt is being named to the Sporting News All-America First Team roster. Hyatt joins the likes of Marvin Harrison Jr., Heisman winner Caleb Williams, Doak Walker Award winner Bijan Robinson and others. Hyatt made the first team over players such as Purdue’s Charlie Jones and Houston’s Nathaniel Dell.

Postseason honors have become commonplace for the Irmo, South Carolina, native, as Hyatt has procured double digit different distinctions so far, more than any other player on Tennessee.

Hyatt broke out in his third year on Rocky Top, torching SEC defenses week in, week out with a 105.6 yards per game average. Hyatt finished the stellar year with 15 receiving touchdowns, a mark that set the UT single-season program record. The Dutch Fork High School product is also well within grasp of Tennessee’s single season receiving yardage record. Hyatt sits 33 yards away from breaking Robert Meachem’s record of 1,298 yards in 2006.

There is a real possibility Hyatt does not play in Tennessee’s bowl game, however. Hyatt claimed he was “50/50” on the decision of whether or not to opt out of the bowl game during an ESPN interview after winning the Biletnikoff. Hyatt has a full two years of eligibility remaining, but with his stock sky-high, the SEC touchdown leader may choose to move onto the next phase of his career. That’s not to say that if Hyatt declares for the NFL Draft he will miss the bowl game, but it is a real possibility the Vols will be without their top two wideouts against Clemson in the Orange Bowl, as Cedric Tillman officially announced on Monday that he has played his last down as a Volunteer.

Hyatt’s incredible season continues to be recognized by the college football world, as his long list of awards headline an even longer list of Tennessee Football postseason awards.

All awards given to Tennessee so far, excluding Hyatt, are below.

AP SEC Coach of the Year