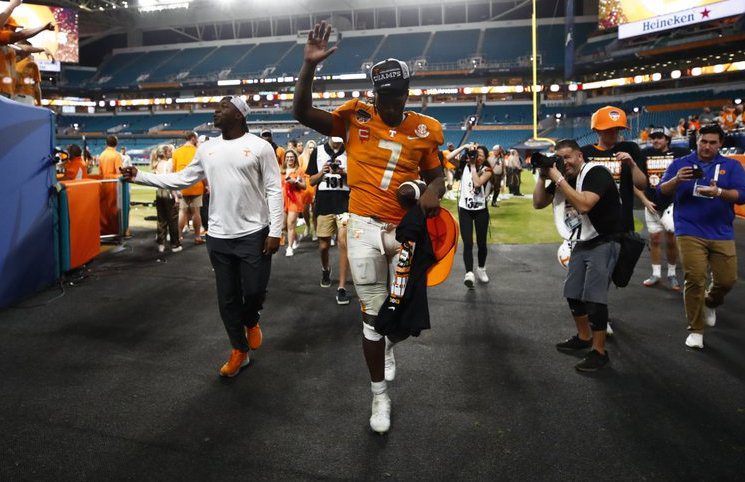 Joe Milton III is coming back for his sixth and final year of eligibility in 2023. Milton sat behind Hendon Hooker at Tennessee for the majority of the last two years, but there was a time Milton was ahead of Hooker on the depth chart.

Entering the 2021 season, Milton was named starter over Hooker. However, Milton struggled in the season opener and in the first half against Pittsburgh in Week 2 until he got injured. Hooker impressed enough in a close Week 2 loss against Pitt and a Week 3 blowout win over Tennessee Tech to win the starting job over Milton, even when Milton returned from injury.

The rest is history. Hooker ultimately led the Vols to a winning season in year one under Josh Heupel in 2021 and then went 9-2 in 2022. Hooker was a Heisman front runner for the majority of this past season until losses to Georgia and South Carolina, and a torn ACL against the latter, derailed those hopes. Milton started Tennessee’s final regular season game against Vanderbilt and the Orange Bowl against Clemson. Milton went 2-0 in those contests as the Vols outscored the two teams 87-14–a great end to the season for Tennessee after a nightmarish November night in Columbia.

Milton was a big reason why Tennessee was able to end the season on a high note, throwing for 298 yards, four touchdowns and no interceptions in his pair of starts.

Milton’s success likely came as a surprise to many considering the second year Vol’s struggles in 2021. But the former Michigan Wolverine showed significant improvement from year one to year two learning the Josh Heupel system, and the 6’5″, 245-pound gunslinger proved in the Orange Bowl he has the ability to sufficiently lead the Volunteers.

With that being said, let’s take a look at the numbers Milton put up in 2022 and how they compare to his subpar 2021 numbers.

*NOT INCLUDED: Milton’s lone pass attempt vs. Alabama (Hail Mary at end of first half)*

4 (all in Orange Bowl vs. Clemson)

One of the biggest disparities between the two seasons is Milton’s efficiency and yards per attempt. In year two at Tennessee, Milton was clearly more comfortable with the system and made better throws. Countless times in 2021, Milton overthrew receivers that left every Vol fan scratching their head. That didn’t happen near as much in 2022.

Additionally, the sack number jumps out. Milton was sacked five times in six quarters to start 2021. Some of that was on Milton, but plenty of it was on the offensive line. Glenn Elarbee’s unit was an unsung hero for the Vols’ success in 2022. Granted, Milton was sacked four times against Clemson, but the Tigers’ defense is arguably the best Tennessee has faced not named Georgia in the past two seasons.

Milton has not thrown an interception as a Vol, but he did lose two fumbles in his first two starts in 2021. In 2022, Milton played as clean as can be, committing zero turnovers.

Outside of a handful of throws, Milton passed the eye test in 2022 after failing in 2021. His performance in Tennessee’s Orange Bowl win is a clear indicator that he is capable of leading the Vols’ offense moving into 2023.