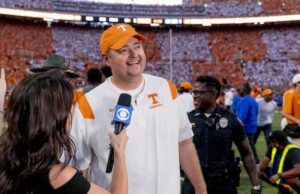 Tennessee head coach Josh Heupel has officially been named a finalist for the 2022 Paul “Bear” Bryant Coach of the Year award.

Heupel was named the Associated Press SEC Coach of the Year in early December. The second-year Tennessee head coach was then almost immediately snubbed for one of the eight spots for the Eddie Robinson Coach of the Year award.

The winner of the award will be announced from the Post Oak Hotel in Houston on Wednesday, Jan. 11, 2023.

The Vols will have one more opportunity to pick up a Top 10 win on the season when No. 6 Tennessee takes on No. 7 Clemson in the Orange Bowl on Dec. 30.