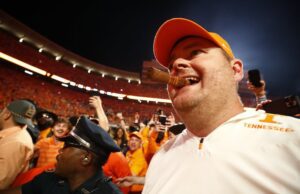 Tennessee head coach Josh Heupel now has another award to his name this offseason.

On Wednesday evening, Heupel was named the Bear Bryant 2023 Fan Favorite Coach of the Year. Heupel received a “record number of votes” according to the organization.

“Good afternoon,” Heupel exclaimed in a video played after the award was handed out. “It’s head coach Josh Heupel here at the University of Tennessee. I hope everyone is doing well! I would like to thank the Bryant family, the Bryant executive leadership team, and the American Heart Association for the honor of being a finalist for this prestigious award, which continues to celebrate the legacy of coach Bryant. Thank you to Accenture for sponsoring the Bryant Award fan vote.”

“As the fan vote winner, I would like to thank Vol Nation and all the fans who voted for this honor,” Heupel continued on to say. “As illustrated this season, there is truly no place like Rocky Top, and Vol Nation is at the heart of that. From our sold-out crowds, the atmosphere on the Third Saturday in October vs Alabama, Vol Walk, and your turnout on the road, our team thanks you for your unwavering support. As I have always said, coach of the year awards are a direct reflection of your players and what they have accomplished. We’ve been fortunate as a staff to coach a great group of young men who came together and turned this program around in the last two years. To see them go out with an 11-win season and a victory in the Orange Bowl was special. So I share this honor with them. Congratulations to all the finalists for the Bryant Coach of the Year award, and thank you again.”

In his second season leading the Tennessee Football team, Heupel took the Vols to an impressive 10-2 regular season record and capped off the year with a strong 31-14 victory in the Orange Bowl over No. 7 Clemson. Tennessee found wins over six ranked teams across the season including Pittsburgh, Florida, LSU, Alabama, Kentucky, and Clemson.

Heupel was also named the 2022 AP SEC Coach of the Year following the end of the regular season.

This now makes back-to-back years with an offseason coaching award for the second-year Tennessee coach. Josh Heupel, along with South Carolina head coach Shane Beamer, was named the Steve Spurrier co-First Year Head Coach of the Year after his efforts during the 2021 season, where he led the Vols to a 7-6 record in his first season at the helm.

With a record number of votes, the 2023 Fan Favorite Coach of the Year, sponsored by @Accenture, goes to @Vol_Football Head Coach Josh Heupel! Heupel led the Vols to 11-2 overall and a 31-14 win over Clemson in the Orange Bowl to close the season. #GBO #SECFB @coachjoshheupel pic.twitter.com/Rk4rc9j2Av