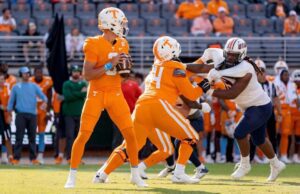 After suffering an injury against UT Martin and missing the season’s final five games, Tennessee freshman quarterback Tayven Jackson looks to be back in action with his teammates this week.

Jackson participated in the Vols’ practice on Friday and Saturday and went through passing drills in front of the media in attendance.

“I think if we continue down the stretch that we have (he will be available),” Heupel said about Jackson on Saturday afternoon.

Jackson found appearances in three games this season: Ball State, Akron, and UT Martin. The Greenwood, Indiana native completed 2-of-2 passes for 28 yards against the Zips with a rushing touchdown and completed one of two attempts for nine yards against the Skyhawks. Jackson also had four rushes for 10 yards on the season.

“He’s been back, he’s been practicing here the last week,” Heupel continued on to say about Jackson. “As long as we continue on that (path) I feel like he’ll be available for us when we get to Miami.”

Jackson was a four-star recruit and a Top 15 quarterback in the class of 2022 according to 247Sports. Jackson led Center Grove High School to back-to-back undefeated Indiana state championships before arriving in Knoxville.

“For Tayven, he’s obviously an elite athlete,” Tennessee QB coach Joey Halzle said about Jackson in August. “It’s just fun to watch him do athletic things every day. Some things that you wouldn’t normally coach, he can do it and you’re like, ‘Oh wow, that’s pretty cool.’”

Earlier this week, the NCAA announced that the organization will be issuing a one-time, blanket waiver that “exempts bowl games from counting toward the four-game redshirt rule in college football,” according to CBS Sports’ Barrett Sallee.

The rule is set in place as teams and programs struggle to balance roster depth due to opt-outs and postseason injuries. This rule is pro-student-athlete in the sense that a player does not have to waste a redshirt year just because a team is in desperate need of bodies at that position.

Jackson, who is eligible to redshirt, looks to fall into that category if he does.

Tennessee will continue bowl prep leading into the 2022 Capital One Orange Bowl on Dec. 30 in Miami, Florida.