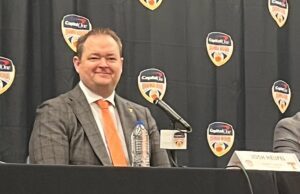 Despite losing two-year offensive coordinator and tight end’s coach Alex Golesh after the regular season, Tennessee head coach Josh Heupel isn’t too worried about the outlook ahead for his Volunteer offense.

Ever since his arrival in Knoxville, the offensive scheme has been Heupel’s project – from the passing game to the running game, Heupel’s fingerprints are all over the Tennessee offense.

With Golesh now the head coach at the University of South Florida, play-calling duties will go to Heupel for the upcoming Orange Bowl against Clemson this Friday night. Fortunately for Tennessee, though, it doesn’t look to be a massive adjustment for the Vols’ offense or its head coach.

“It’s not,” Heupel said about how much of an adjustment it will be for him to go to play calling. “Like for us as a staff, we go through that process every single week. We go through it on game day. The fact that [QB coach] Joey [Halzle] and I have been together for 15 plus years, [OL coach] Glen [Elarbee] and I have been together I think for seven years, the communication on game day is seamless, and I’m excited for this one.”

During the joint head coaches Orange Bowl Press Conference on Thursday morning, Heupel revealed that his coaching search will take place after the conclusion of the bowl game.

“The pros and cons for hiring Halzle are clear,” RTI’s Ryan Schumpert wrote in early December. “Halzle knows Heupel’s system and the two clearly have a comfort level with one another. On the flip side, Halzle has very little experience. He’s only been a college quarterback for three years and has no experience calling plays.”

Either way, though, those conversations are being saved until after bowl season. Until then, Heupel will call his offense, but not without the help from his offensive coaching staff like Joey Halzle and Glen Elarbee.

No. 6 Tennessee and head coach Josh Heupel will take on No. 7 Clemson in the 2022 Capital One Orange Bowl this Friday night at 8:00 p.m. ET from Miami, Florida.