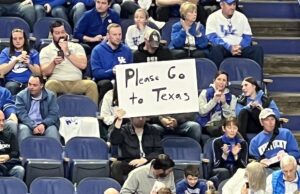 Kentucky fans troll John Calipari during the loss to South Carolina. Photo via @SophieMeadors on Twitter.

After a dramatic week in college basketball and a disappointing start to the season for the Wildcats, some Kentucky fans are already trolling head coach John Calipari.

Kentucky lost to South Carolina on Tuesday night by a score of 71-68, snapping a 28-game winning streak in Rupp Arena. The Wildcats never led in the game in Lexington.

During the game, one fan was seen holding up a sign that read “Please go to Texas” with another photo showing a Kentucky security officer removing the fan.

Fan escorted out of Rupp after holding up a “Please go to Texas” sign during the South Carolina game… pic.twitter.com/llCn4A3WJn

Vol Hoops: Tennessee Blows Past Vanderbilt With Massive Second Half

On Jan. 5, the University of Texas fired head coach Chris Beard after a domestic family violence charge on Dec. 12, 2022. While Rodney Terry has taken over as the Longhorns’ interim head coach in the meantime, some have already been pointing to a familiar name as Texas’ next head coach – Kentucky’s John Calipari.

Since the news was revealed regarding a likely coaching search down the road for Texas, Calipari’s name has been a frequent choice. 247Sports’ Will Backus listed Calipari as one of the early names to watch in an article earlier this week.

“The last few years have not been kind to Calipari and Kentucky,” the 247Sports article stated. “The Wildcats are off to one of their worst starts in recent memory this season, with a 10-5 record including a 1-2 mark through the first three games of SEC play. They just lost by 26 points against Alabama. There is still time to turn it around, but things look pretty bleak in Lexington. Still, it is hard to find current coaches as accomplished as Calipari.”

It’s safe to say that tensions are high in Lexington.

Calipari and the Wildcats (10-6, 1-3 SEC) will head south to Knoxville this Saturday afternoon for a matchup with No. 5 Tennessee (14-2, 4-0 SEC) at 12:00 noon. Tennessee will retire the jersey of legendary guard Chris Lofton before the game.