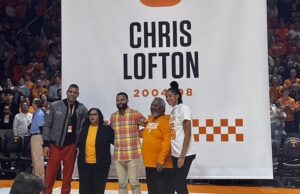 When talking about Chris Lofton’s Tennessee career, it’s hard not to bring up the name of Kevin Durant. Lofton’s shot over Durant in 2006 is one of the unforgettable moments of modern Tennessee basketball.

After the epic matchup in Knoxville, Lofton’s game left a lasting impression on the former Texas guard and current NBA superstar.

During halftime of Tennessee’s game against Kentucky on Saturday, the Vols’ basketball program officially retired Lofton’s No. 5 jersey and hoisted his banner into the rafters. Just about 40 minutes after that celebration took place, Durant sent out a tweet to congratulate his former on-court foe.

“Congrats to Chris Lofton, got his jersey retired at the University of Tennessee..one of the best competitors I’ve been on the court with,” Durant wrote on Twitter. “Respect #5”

Congrats to Chris Lofton, got his jersey retired at the University of Tennessee..one of the best competitors I’ve been on the court with. Respect #5

More from RTI: Chris Lofton’s No. 5 Tennessee Jersey Hoisted Into the Rafters

On Dec. 23, 2006, head coach Rick Barnes and the Texas Longhorns traveled to Knoxville for a matchup with the Tennessee Volunteers.

The Longhorns led the Volunteers from 13:45 in the first half until the 18-second mark in the second half.

Down by two points with 22 seconds left, Lofton took the ball from Wayne Chism at the top of the key. Durant, who was guarding Chism, switched off to cover Lofton as Texas defender DJ Augustine faded a few steps back toward the wing. A few steps back from the three-point line, Lofton launched a shot attempt that felt like it was from a mile away. With Durant completely in his face, Lofton’s line drive shot swished into the net as the Tennessee crowd erupted. That gave Tennessee the 88-87 lead.

Tennessee’s Ramar Smith hit one free throw to give the Vols a two-point lead, but it was Durant who showed his impressive abilities by tying the game at 89-all with one second left to force overtime.

In 38 minutes on the court, Chris Lofton finished with 35 points on 8-of-24 shooting from the field and 7-of-16 shooting from behind the three-point arc. Lofton also went 12-of-13 from the free-throw line and added in 11 rebounds to complete the double-double.