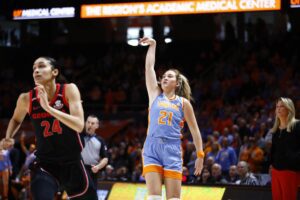 The basketball uniforms are primarily blue on the shorts and the jersey. A large orange stripe with white trim stretches from the top of the sides of the jerseys continuously down to the pants to wrap around and create a large orange stripe at the bottom of the shorts. The orange numbers and orange “Lady Vols” script are also inside a white outline.

Tennessee is wearing both orange and blue accessories with the uniforms against Georgia.

#LadyVolNation what do we think about the new uniforms… ? pic.twitter.com/RRfaLnvD5j

THE BENCH LOVES IT pic.twitter.com/gdmIlcBfEM

More from RTI: Candace Parker in Attendance as Chris Lofton’s No. 5 Tennessee Jersey is Hoisted Into the Rafters

The Summitt Blue uniform collection was originally announced in August 2022 as a way to recognize the 50th anniversary of Title IX on Tennessee’s campus.

“Tennessee’s history as a worldwide leader in women’s athletics, along with the Lady Vols’ unique legacy of excellence are traditions we are proud to celebrate,” Tennessee Vice Chancellor/Director of Athletics Danny White said via a press release in August. “As some of our teams recently saw their new Summitt Blue uniforms for the first time, they reacted with a joy and enthusiasm that I hope will extend to our fans and proud alumni.”

The Lady Vols first debuted the blue accent in 1968. With no company offering orange uniforms at the time, Joan Cronan eventually decided on Columbia blue jerseys with orange lettering for Lady Vols’ home games. Ever since then, a new tradition was born.

Tennessee’s football team also had some fun with the Summitt Blue color this year, adding the blue accent to accessories for the homecoming game against UT Martin this past season.

The Lady Vols defeated Georgia by a score of 68-55 on Sunday afternoon in Thompson Boling Arena.

Here is a look at what the Tennessee soccer and Tennessee volleyball’s Summitt Blue uniforms looked like:

A new kit to honor a legacy ? pic.twitter.com/NMoikc8oqu