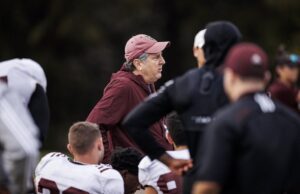 Sports rivalries and competition are thrown out the door at the most serious of times, which is exactly the situation in front of Mississippi State and the college football world right now.

According to Bulldawgs247 on Sunday afternoon, Mississippi State head coach Mike Leach was airlifted to the University of Mississippi Medical Center after a personal health emergency over the weekend.

“This is not some fire drill or something that just involves a cough,” 247Sports’ Steve Robertson wrote in a message board post. “Coach needs your prayers and he needs them right here and now.”

Tennessee head coach Josh Heupel also joined the social media chorus yesterday, sending his best to the coach that is so famously known as “The Pirate.”

“Thinking about [Mike Leach] tonight,” Heupel said in a tweet. “Praying for you Coach.”

Thinking about @Coach_Leach tonight. Praying for you Coach?

Several coaches and programs from around the SEC and the nation have sent out tweets acknowledging Leach and his situation.

Praying for a dear friend, @Coach_Leach, today. Mike will always be a part of the Big Blue Nation from his time here in Lexington. Our thoughts and prayers are with him, his wife Sharon, their four kids and the entire Mississippi State family.

? up for coach Leach & @HailStateFB

Praying for Coach Leach. He’s always been very kind to so many. https://t.co/EIn02Y16pb

Our thoughts and prayers are with Coach Leach. Keep battling, Mike. We’re all with you. ???

Leach is a treasure in the football world and brought his infectious personality to Starkville, Mississippi prior to the 2020 season. In his three years with Mississippi State, Leach has led the Bulldogs to a 19-17 record in 36 games.

Mike Leach has had quite the relationship with Tennessee in the past handful of years, too.

Leach was a candidate for the 2017 Tennessee head coaching search. As the story goes, then-Tennessee AD John Currie flew to meet with Leach by himself to discuss the open job. Tennessee officials, though, were not pleased with the decision and eventually placed Currie on administrative leave before firing him. Sometime later, Leach opened up on his thoughts regarding the situation with him and Tennessee a few years back.

“It was a coup d’etat. You can call it what you want, and I hope I don’t hurt anybody’s feelings at Tennessee, but it’s a fact,” Leach stated in an interview with Paul Finebaum in 2019. “It was like something out of Shakespeare. All the sudden, they call home the AD, and en route, they off him. Then the king, or the chancellor, who orders offing the AD because the guards were around him demanding that it be done in order to secure a position. Shortly after that, they off the president. Then the off the very chancellor who set it all in motion, or allegedly.

“There was a whole power shift. Anyway, hopefully, the ground for the good people at Tennessee is more stable now.”

Prior to his time in Starkville, Leach spent 8 years at Washington State, which was preceded by 10 years at Texas Tech. Overall, the Pirate has a record of 158-107 as a head coach in Division I college football.

Mike Leach has always been known as one of the most fun and entertaining coaches in the college football landscape. As a personal favorite, here’s a look at Mike Leach taking his talents to the small screen for one of the best cameo spots in television history.

All time cameo by Mike Leach on Friday Night Lights. Hope the pirate pulls through? #WreckEm?pic.twitter.com/173ByYmklN