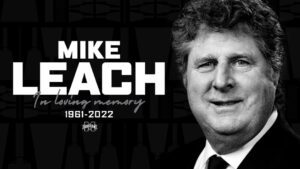 Leach, a beloved coach in the college football community, was 61 years old at the time of his passing.

“Mike was a giving and attentive husband, father and grandfather,” the Leach family said in a statement through the university. “He was able to participate in organ donation at UMMC as a final act of charity. We are supported and uplifted by the outpouring of love and prayers from family, friends, Mississippi State University, the hospital staff, and football fans around the world. Thank you for sharing in the joy of our beloved husband and father’s life.”

In 1999, Leach joined the Oklahoma staff, led by Bob Stoops, as the offensive coordinator for one year. That one year, though, happened to also be the first year that one future Tennessee head coach Josh Heupel would transfer to the Sooners’ program and take over as the starting quarterback.

“I am heartbroken on the passing of Coach Leach,” Heupel said in a tweet on Tuesday morning. “In 1999, he gave a kid out of Snow College in Utah a shot at major college football. He saw something in me when no one else did. Like so many across our sport, I am grateful for Coach Leach’s impact on my life both personally and professionally.

“His offensive philosophy and vision were ahead of his time, and they continue to shape the game today. Off the field, he was one of a kind -an incredible storyteller, a man full of wisdom and someone who always cared about his former players and coaches. I enjoyed our friendship over the years. My deepest condolences go out to Coach Leach’s family, his wife Sharon, his kids and grandkids and the entire Mississippi State football program.”

Leach has had countless memorable moments during his 21-year head coaching career. The coach famously known as “The Pirate” spent 10 years at Texas Tech, eight years at Washington State, and had just wrapped up his third season in Starkville with Mississippi State.

Here is a collection of some of the best Mike Leach moments and tributes that people have been posting to social media on Tuesday morning after the news.

Heartbroken. Prayers for the entire Leach family and @HailStateFB pic.twitter.com/pluR0EMCDN

I first met Mike Leach in 1999 at Oklahoma. He had lunch in one hand & a remote in the other watching game film. Josh Heupel was his quarterback. A revolution was about to be unleashed. Sad, sad day for football. RIP Pirate. We will miss you.

So sad to hear of Mike Leach’s passing. Praying for his family and loved ones.

Blessed to have experienced Mike Leach. Truly one of a kind – still feels surreal. https://t.co/CFPuKOybO6

Mike Leach had his detractors. He was certainly not without controversy. Honestly, he kind of dug both of those facts. But no matter where one stood on Leach, there is one fact that is indisputable: The world is going to be less interesting without him in it.

My thoughts and prayers go out to Coach Mike Leach, his family, friends, and all the young men he impacted across his storied career in college football.

We take for granted the spread offense in college football these days. 25 years ago NO ONE was running it before Mike Leach got it going at Texas Tech. Changed the entire sport.

Absolutely gutting for his family, team, and everyone in his life. Thinking about all of you.#RIPMikeLeach

Mike Leach was 1-of-1. He was one of the best characters in sports and was an innovator that helped change football. In a world where coaches are corporate and mostly the same, he stood out because he was genuinely himself.

This is a terrible day for college football.

A college football personality if there ever was one. Rest In Peace to the pirate. https://t.co/AC3BAgT2fS

Leach was Heupel’s OC at Oklahoma in 1999 and helped lead the transfer quarterback to a 3,400+ yard season.

Mike Leach was truly the best

My favorite thing Mike Leach did at Washington State was choose Jamal Morrow to be team captain solely based on his performance on “The Price is Right” pic.twitter.com/uV3I8B6GPg