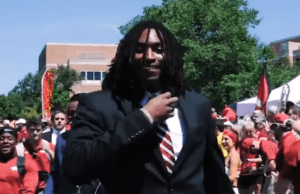 Trey Knox, a four-year tight end at the University of Arkansas, officially entered the transfer portal to start the week on Monday.

Originally from Murfreesboro, right outside of Nashville, Tennessee, Knox played at Blackman High School before committing to the Razorbacks’ 2019 recruiting class.

According to the University of Arkansas, Knox “helped Blackman HS to a 10-2 record and a second-round berth in the 2018 Tennessee High School Football Division I Class 6A playoffs.”

Trey Knox had the third-most receiving yards and the fourth-most receptions for the Razorbacks’ offense during the 2022 season with 26 catches for 296 yards and five touchdowns.

With a frame of 6-foot-5, 245 pounds, Knox was known for making some impressive contested catches during his time in Fayetteville. The big-bodied tight end had a knack for timely catches in big moments and wasn’t afraid to use his size to his advantage.

More from RTI: What Are Tennessee’s Greatest Positions Of Need In The Transfer Portal?

While Knox does have a Tennessee connection through his home state and his high school, it does look like another program from the SEC East is already making moves in his recruitment from the transfer portal.

On the same day that Knox entered the portal, HawgSports’ Danny West submitted a prediction for him to land at South Carolina.

Additionally, on Tuesday, Arkansas tight ends coach Dowell Loggains was announced to be moving to the Gamecocks’ program to take over as the offensive coordinator. Considering the two have been together for the past two years, a reunion between Knox and Loggains could potentially be on the table as South Carolina started to find some offensive hope late in the year behind the arm of quarterback Spencer Rattler.

Loggains has also spent time with the Dallas Cowboys, the Tennessee Titans, the Chicago Bears, and more teams from the NFL despite a fairly young coaching age of just 42 years old.

In total, Trey Knox has 81 career receptions at Arkansas for 892 yards and 9 touchdowns. The Murfreesboro tight end found the most single-season receptions of his four-year span during his freshman year in 2019 but topped his own touchdown total this most recent season with five.

Tennessee has already picked up a transfer portal tight-end commitment from McCallan Castles earlier this month.

Tennessee Baseball pitcher Drew Beam also tried to help the cause on Twitter.

[email protected] hey man come back home, we can run it back for old time sakes?? @Vol_Football https://t.co/UASG738HK2 pic.twitter.com/viBMcOsZ3v