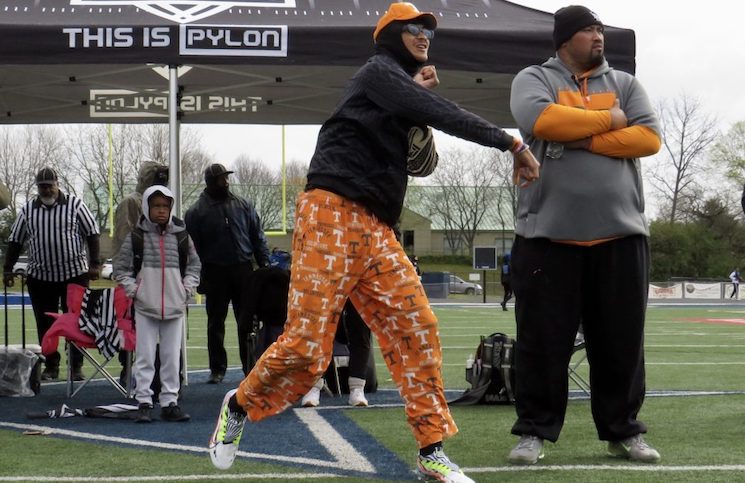 Tennessee five-star freshman quarterback Nico Iamaleava is in Hawaii to play in the Polynesian Bowl this weekend. The bowl will take place on Friday evening at 9 p.m. ET and will be broadcasted on the NFL Network.

Iamaleava was the first player to arrive in Hawaii this week and has been preparing for the game, as the Polynesian Bowl’s Twitter account recently posted a throw by Iamaleava in practice.

The Polynesian Bowl is an annual high school football all-star game held in Laie, Hawaii, at Aloha Stadium. The game is played every January, and it features several of the top high school seniors in the nation. The majority of participants are of Polynesian ancestry, such as Iamaleava. The five-star freshman is the only member of the Vols’ 2023 recruiting class on the Polynesian Bowl roster.

While in Hawaii, Iamaleava did an interview with CBS Sports discussing his thoughts on the competition for the starting quarterback job and getting acclimated to college.

“It’s been my goal since Day 1 to go out there and compete with whoever is the guy,” Iamaleava said. “But I also look forward to learning from guys like Joe, Navy, Gaston and the whole QB room. I think we have a great QB room. My first three weeks there, it felt good to be a part of it. Nobody has any ego, and everybody gets along well. Whether it is competing for the job, backing up Joe, or backing whoever it is, I look forward to learning. It’ll be freshman year, so I know there will be a lot adjustments to college life. But I look forward to wherever [my] spot is.”

Iamaleava enrolled at Tennessee on Dec. 16 and took part in the Vols’ Orange Bowl preparation and festivities in both Knoxville and Miami.

“Obviously, the raw skills are there,” Tennessee HC Josh Heupel said about Iamaleava on early signing day. “Arm talent and extremely athletic and explosive inside of the pocket. Can make plays with his feet. In a short amount of time, we’ve been able to see those things already.”

The Polynesian Bowl will serve as Iamaleava’s final high school football game. On Monday, Iamaleava did an interview with Hawaii’s KHON2 TV Sports Director Rob DeMello discussing his thoughts on playing in the game and celebrating his culture simultaneously.