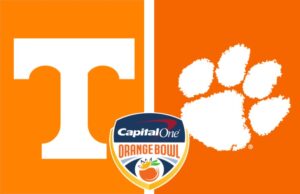 Tennessee vs Clemson in the 2022 Capital One Orange Bowl.

The Opponent: Clemson University was founded in 1889 by Thomas Green Clemson, a wise man who married into considerable money. According to research, Mr. Clemson’s Will explicitly directed that the school be modeled after Mississippi State University. Talk about aiming high. In 100+ years since, Clemson has grown into South Carolina’s second-largest public university. Notable alumni include Robert Howell Brooks, the late founder of Naturally Fresh, Inc. The company started small, producing salad dressings and condiments. Howell hit it big with his vision to take a small Clearwater, Florida restaurant worldwide. Under his leadership, Hooters brought spicy wings and partially exposed butt cheeks to over 430 locations across the globe. Cheers to a true visionary, Robert H. Brooks.

Are they any Good? Yes, Clemson is good. Arguably no other team in America was more hotly debated than Clemson throughout this season. The combination of recent successes, a cringy coach, and playing in the ACC make Clemson an easy target for haters at times. Like Tennessee, Clemson rode an undefeated season into November before getting thoroughly humbled on the road. Like Tennessee, the Tigers were still alive for the college football playoffs before getting run over by the Shane Train to end their season. The Tigers were unlikely to make the playoffs with one loss, but they are absolutely a Top 10 team in college football. For the majority of the season, it was thought that quarterback DJ Uiagalelei was holding this team back with indecisive and inconsistent play. Gone is Uiagalelei, enter freshman phenom Cade Klubnik making his first start. The real engine of this team has always been running back Will Shipley and one of the stoutest front seven’s in college football though.

What does Vegas Say? This game opened up at Tennessee +6.5 and got as high as +7 for a moment. The line is now at +4.5 on some sites. Over/Under is set at 63.5. Clemson is 8-5 ATS the spread this season. They have been a favorite in all thirteen games. Tennessee finished its regular season 9-3 ATS, and 1-1 outright as underdogs.

Matchup to watch on Defense: Defending Will Shipley. Cade Klubnik looked fantastic in the ACC Championship after coming on early in relief.  The freshman QB can probably shred Tennessee’s secondary if given time in the pocket. Expect Clemson to give Klubnik some help though, and that will mostly come in the form of sophomore running back Will Shipley. Shipley has 1,100 yards on the season with an impressive 5.8 ypc in Clemson’s zone running scheme. He will go up against a very stout Tennessee run defense playing without Jeremy Banks. While he only has 34 receptions on the season, Shipley is very dangerous when catching the ball out of the backfield. I expect Tennessee to see a lot of that Friday night. It is a good safety blanket for a young QB, and a good way to get your best player the ball in space. It forces Tennessee’s linebackers and safeties to tackle Shipley in the open field, which is a challenge the Vols aren’t always up for. A good goal should be to keep Shipley below 120 yards of total offense. That starts with bottling up the traditional ground game, then keeping tight coverage on #1 when he leaves the backfield. If Shipley gets rolling, this game becomes much more manageable for Cade Klubnik.

Matchup to watch on Offense: Joe Milton versus pressure. Joe Milton is going to miss some throws, every quarterback does. The matchup to watch is how Joe Milton handles pressure. This is a Clemson defense with 40 sacks on the season. They lead the ACC in tackles for loss. Even with the opt outs of Myles Murphy and Trenton Simpson, the Tigers are loaded with disruptive defensive players. Jeremiah Trotter and Barrett Carter are both wrecking balls at the linebacker position, a combined 11 sacks on the season. Bryan Bresee is a first round draft pick who can bring pressure through the interior. Tennessee’s offensive line has played well this season, and will be at full strength Friday night. I expect Clemson to pressure Joe Milton on early downs though. How Milton handles that pressure will go a long way in determining this game. Milton has to first feel the pressure, an area where Hendon Hooker excelled. From there it is a decision making game; tucking to run versus potentially forcing a throw. The reality is this is Joe Milton’s 5th year in college football. He is playing in a very quarterback-friendly offense, one which he is very familiar with. Tennessee coaches should be able to trust Joe Milton to make good decisions. Nothing we’ve seen in limited action this year suggests they can’t. This is Milton’s biggest test in some time though. A good performance can go a long way in securing him the starting job for next season. It starts with him feeling and responding to pressure.

Fun Fact: Clemson is 2-1 in the Orange Bowl with Dabo Swinney as its head coach. Swinney’s first Orange Bowl at Clemson was a forgettable one though. In 2012, the Tigers were defeated by West Virginia 70-33. It was a game that shattered almost every Orange Bowl offensive record. Rumor has it that Tennessee was all set to poach defensive coordinator Kevin Steele away from Clemson before that game, but the final score was enough for Dave Hart to veto that hire. Hart suggested someone from the Nick Saban coaching tree would be a safer bet, so Derek Dooley opted for Sal Sunseri instead. Swinney coached in the 2000 Orange Bowl as the wide receivers coach at Alabama. It was an all time classic. Alabama fell in overtime to Michigan by a score of 35-34. A missed extra point was the deciding factor. Tom Brady was the quarterback for Michigan that day. Shaun Alexander was the star running back for the Tide. Alexander retired in 2008, and Tom Brady is still playing of course.

So What Happens? So many of these bowl games come down to which team shows up more interested in playing. That very well may be the case Friday night. Tennessee’s defense has to be engaged in this game, and they have to pressure Cade Klubnik in his first ever start. The Vols’ 27 sacks have come in bunches this season. Tennessee had 16 combined sacks in very solid defensive performances against Pitt, LSU, Kentucky, and Vanderbilt. The Vols had just 3 total sacks against Florida, Alabama, Georgia, and South Carolina. Whether it is because of talent or scheme (probably some combination of both), Tennessee’s secondary is not good enough to make plays when opposing quarterbacks get comfortable in the pocket. This is obviously more complicated than strictly effort, but effort can go a long way on the defensive side of the ball. The Vols looked totally uninterested defensively last year in the Music City Bowl, and got torched by Purdue playing without their best weapons. Thankfully that game did not have a large national audience, but Friday night will. I don’t expect effort to be a problem for the Vols offensively. Players seem to enjoy playing in this scheme, and at over 47 ppg it is not hard to imagine why. It is a huge opportunity for Joe Milton, Bru McCoy and Squirrel White. These guys can show this offense is more than just Hyatt & Hooker. Can the Vols get the run game going against a stout Clemson front seven though? We debated earlier how Joe Milton would handle pressure. The easiest way to relieve that pressure is with a productive ground game. Tennessee has three healthy running backs in Small, Wright, and Sampson. All three were incredibly productive to end the season, so it will be interesting to see how carries are divided up. It will also be interesting to see how involved Joe Milton gets in the running game himself. Tennessee played it safe with Milton against Vanderbilt. I would be surprised if we don’t see him running more Friday night. This game probably comes down to Joe Milton. I expect Clemson to score 30+ on Tennessee’s defense. Can Joe Milton keep up? I said earlier that Milton was going to miss some throws, like every QB does. That is true. The key will be how many he misses though. If Milton overthrows 2-3 deep balls, can he connect on 2-3? He may miss a routine throw or two, but can he make most of them? I think Milton will play pretty good, but that won’t be good enough unless Tennessee’s defense makes a few disruptive plays. A great season ends on a sour note. Clemson 38, Tennessee 30