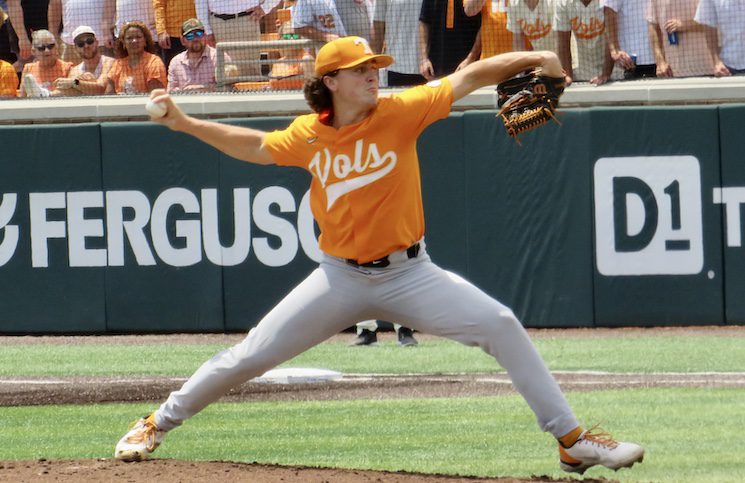 After Tennessee’s incredible 2022 season that nearly resulted in a College World Series appearance, all starters and a handful of arms went on to the next stage in their career.

Despite losing a significant amount of talent to the draft, Vols head coach Tony Vitello is bringing in loads of talent via the 2023 recruiting class and the transfer portal. In addition, Vitello has the luxury of returning 2022’s primary starting rotation in Chase Dollander, Chase Burns and Drew Beam.

With another loaded roster set to take the diamond in the spring, Tennessee will once again have players closely monitored by MLB scouts.

Taking a look at the latest 2023 MLB Mock Draft from MLB.com, draft expert Jonathan Mayo predicts two Vols will be taken in the first round.

Mayo’s mock has the Nationals selecting Tennessee RHP Chase Dollander second overall. Dollander became Tennessee’s best pitcher down the stretch last season. Dollander rose to the occasion in seemingly every big moment. The incoming junior was fantastic in a late night battle against LSU in the SEC Tournament, striking out nine batters, allowing just four hits and one earned run in 6.2 innings of work.

Dollander’s high-level play continued into the NCAA Tournament, when the former Georgia Southern Eagle delivered a clutch performance against Notre Dame in an elimination game in the Super Regionals. The Evans, Georgia, native held the red-hot Irish to a mere two runs and five hits in 7.0 innings, striking out five batters in the process. Dollander finished the season 10-0 with a 2.39 ERA across 79 innings pitched.

The 2022 SEC Pitcher of the Year will look to build off of a remarkable 2022 campaign in what will be his final collegiate year.

Mayo’s second Vol projected to go in the first round has yet to play a game in a Tennessee uniform, as the mock has the Brewers selecting SS Maui Ahuna 18th overall.

Ahuna transferred to Tennessee from Kansas in early June, serving as a highly attractive portal add by Tony Vitello. Tennessee lost Cortland Lawson to the 2022 MLB Draft, so Ahuna will come in and immediately play a crucial role for the Big Orange.

The former Jayhawk standout was an All-Big 12 Honorable Mention in 2022, hitting .316 with 11 doubles, three triples, a home run and 25 RBI. Ahuna hit multiple RBI in six games and recorded a 14-game reached base streak. The Hawaii native also stole bases at an incredible rate, successfully stealing eight of nine bases during his sophomore season.

Mayo’s first-round mock would make 2023 the first MLB Draft to ever have two Vols selected in the Top-30 picks.

Ahuna and Dollander are two of several talented players on Tennessee’s roster for the upcoming season, as the Vols are in a solid position to potentially repeat as SEC Champions.