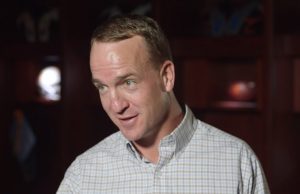 While telling the story of the Dallas Cowboys and Tampa Bay Buccaneers playoff game on Monday night, VFL and Hall of Fame quarterback Peyton Manning pulled back the curtain on a fascinating discussion.

Manning revealed some fairly surprising thoughts on halftime during the final Monday Night Manningcast of the season.

Football fans and the football media have been conditioned to believe that halftime adjustments are one of the most important aspects of the game. Heck, that’s true for just sports in general. After hard-fought games, especially second-half collapses or comebacks, coaches and players are often asked about halftime adjustments that led to the win or the loss.

That’s nothing but a myth, according to Manning.

“I don’t know if I ever made a halftime adjustment in my entire 18-year career,” Peyton Manning said at the start of the third quarter. “I think that’s the biggest myth in football – the halftime adjustments. You go in, you use the restroom, you eat a couple of oranges, and then the head coach says, ‘Alright, let’s go!’”

“Yeah, no question,” Eli Manning responded to his brother. “I mean, they’re in there for like three minutes!”

“There’s no time!” Peyton exclaimed with a laugh.

It’s interesting to compare that to a situation from the Tennessee Volunteers football season this past fall.

On the Tuesday after Tennessee’s win against Missouri, Nov. 15, the media’s first question to Tennessee linebackers coach Brian Jean-Mary revolved around halftime adjustments that were made against the Tigers. While Jean-Mary does mention a few more adjustments that took place compared to Manning, Jean-Mary does acknowledge that it was more of just refocusing and getting back to fundamentals as opposed to big sweeping halftime changes.

“Just getting back to who we were,” Jean-Mary said about Tennessee’s improved second-half play against Missouri in November. “We made some, what we felt, were uncharacteristic mistakes. Putting our eyes in the wrong place and they started really running the quarterback in some design quarterback runs that we didn’t feel like we handled very well. We made some of the adjustments at halftime, but really it wasn’t anything that we did miraculously. Guys just got back to playing with fundamentals and putting their eyes in the right spot and we were able to get off of the field on third down.”

While Jean-Mary didn’t come out and say the team enjoyed some oranges and then got back to work (duh), his answer does somewhat fall in line with Manning’s thought process from Monday night.

Sweeping changes? That’s for the next week if it wasn’t done the week before. Refocusing, going to the bathroom, rehydrating, and grabbing a quick snack? That’s what halftime is all about.

Sort of like what the fans in the stands are doing over the same time span.

“I don’t know if I ever made a halftime adjustment in my entire 18-year career. I think that’s the biggest myth in football- the halftime adjustments. You go in, you use the restroom, you eat a couple of oranges, and then the head coach says, ‘Alright, let’s go!'”- Peyton Manning pic.twitter.com/j17FWpXChq