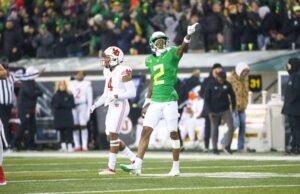 If you blinked on Monday, you may have missed it.

The Baltimore native and 6-foot-5 receiver has spent the last two years with the Ducks after being a four-star prospect in the class of 2021. During his first year with Oregon, Thornton caught nine passes for 175 yards and two touchdowns. Thornton’s best freshman-year performance came in the Alamo Bowl against Oklahoma when he caught four passes for 90 yards and a touchdown.

During his sophomore season with the Ducks, Thornton upped most of his individual statistics with the help of incoming quarterback Bo Nix. Thornton caught 17 passes for 366 yards and one touchdown as he played in 11 of Oregon’s first 12 games during the regular season.

With Jalin Hyatt and Cedric Tillman not returning to Tennessee next season, Thornton will have an opportunity to play for the Vols right away. Tennessee already boasts the combination of Squirrel White, Bru McCoy, and Ramel Keyton, but will still have chances for Thornton just based on the tempo and speed of the offense in general.

The 6-foot-3, 290-pounder will have two years of eligibility remaining after just completing his sophomore season.

Norman-Lott only played in seven games for the Sun Devils this year as he battled through injuries throughout the season. Over the span of those seven games, though, Norman-Lott totaled 14 tackles, three tackles for loss, two sacks, and two pass deflections.

With Byron Young, Roman Harrison, and LaTrell Bumphus all leaving the Tennessee program this offseason, the Vols will need to figure out a way to match that production next season. While Tennessee does have plenty of depth that is awaiting the opportunity to play, adding a player such as Norman-Lott can go a long way.

And, lastly, Tennessee closed out the night with a commitment from former Miami offensive tackle John Campbell.

After spending the last five years at Miami (FL), Campbell is officially heading to Knoxville with two years of eligibility still to go. The 6-foot-5, 320-pound left tackle was a three-star prospect from Dr. Phillips High School (FL) and committed to the Hurricanes over 40 other programs.

Campbell saw action in four games during his true freshman season in 2018, which led to a redshirt-freshman season in 2019 where he saw playtime in 11 games with two starts as well. Campbell then came back for his redshirt-sophomore season in 2020, playing in seven games and starting in four. Misfortune struck in 2021, though, as the redshirt sophomore missed the entire season while recovering from surgery on his leg.

Bouncing back from missing the 2021 season, Campbell came back in full force for his fifth-year redshirt-junior season with the Canes. Campbell played in and started all 12 games for Miami during the 2022 season.

While Darnell Wright and Jerome Carvin are heading to the NFL Draft, Tennessee has now brought in three linemen through the portal this offseason: Larry Johnson III from JUCO’s Hutchinson C.C., Andrej Karic from Texas, and now John Campbell from Miami. Tennessee is also bringing in talented linemen from the 2023 recruiting class such as four-star Shamurad Umarov and three-star Vysen Lang.

Tennessee’s seven transfer portal additions (as of Jan. 9) are as follows:

* indicates a commitment on Monday, Jan. 9