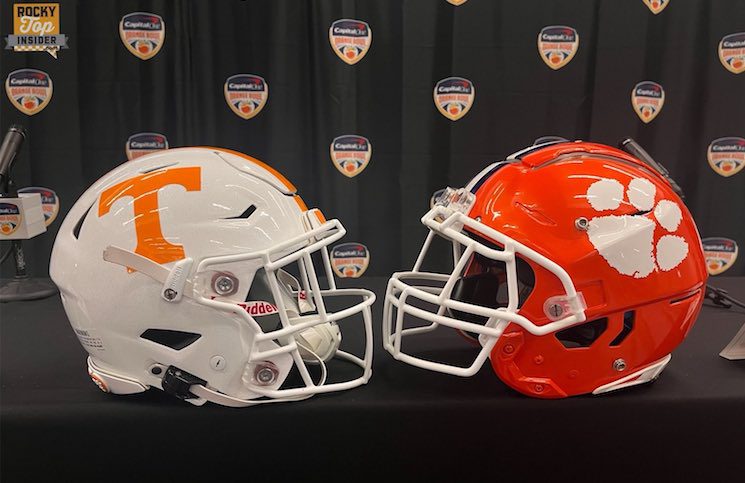 No. 6 Tennessee concludes its 2022 season Friday night against No. 7 Clemson in the Orange Bowl. The Vols are 10-2 and could win 11 games for the first time since 2001 with a win over the Tigers.

Each week, the RTI team will provide game predictions for Tennessee’s weekly opponent.

We move on to Clemson for the final picks of the 2022 season.

More From RTI: Previewing Clemson-Tennessee In The Orange Bowl

And here… we… go. The 2022 Capital One Orange Bowl is here and the Volunteers and Tigers are set to square off.

Let’s start with the quarterback on both sides. With Joe Milton III and Cade Klubnik, both Tennessee and Clemson will be starting a quarterback that has not been the starter for the vast majority of the season. Clemson is handing the keys to the castle over to freshman superstar Klubnik, while Tennessee is going with Milton after the Hendon Hooker injury. For Milton, it’s simply about execution. While I do think the loss of OC Alex Golesh is a hit, I don’t see the playcalling being a storyline that folks are pointing back to after the game. I do think that Milton and the Tennessee offense will be put in a position to succeed, they just have to go out and execute. Ramel Keyton and Bru McCoy need to be difference makers, Squirrel White has to get separation with his speed, and most importantly, Milton has to be able to hit them down the field with touch and precision. Do that and it’s a four-quarter battle. Don’t do that and I start to get nervous about Tennessee’s chances.

We know the big storyline of this game – who won’t be playing. Tennessee will be without Hendon Hooker, Jalin Hyatt, Cedric Tillman, and Jeremy Banks on Friday night in Miami. And, personally, I do think that is a massive obstacle to overcome. Can it be done? Sure. This is college football. But will it be done? That’s to be determined.

On the defensive side of the ball, we have seen Tennessee implement a “bend-but-don’t-break” defense at times throughout the year, limiting opponents to just a field goal instead of a touchdown after driving down the field. To me, that would be considered a success tonight in Miami. I do think that Clemson will be able to put points on the board and I do think they will rack up plenty of yards throughout the game. It’s imperative that Tennessee can buckle down in its own territory and hold Clemson to three points instead of seven points. At times.

Do I see a way that Tennessee can win? Yes I do. This is still an electric offense that can move the ball at will because of the scheme. But it’s going to take a lot of execution from players that haven’t necessarily been asked to execute on this big of a stage this year. I see Clemson’s offense being too much to handle and Tennessee’s offense coming up just short late in the game.

Either way, it sure will be exciting.

Both Clemson and Tennessee had CFP potential, and both came up short down the stretch. But even though the regular seasons may have ended on a sour note for each squad, this game is still very significant for multiple reasons.

First, the prestige of the Orange Bowl is not to be downplayed. Second, and arguably most important, both quarterbacks have a lot to prove. Each team’s quarterback situation is similar yet different. Neither Joe Milton III (UT) or Cade Klubnik (CLEM) were the regular starters for their respective teams. The Orange Bowl will be Milton’s second start and Klubnik’s first. Of course, Klubnik’s start is by choice and Milton’s is due to injury, but it is paramount for both QBs to deliver on this stage going into next season. Klubnik needs to show the Clemson faithful that the he is the guy who can bring them back to the CFP, and Milton has a prime opportunity to get a leg up in the upcoming QB competition for Tennessee.

Opt-outs will undoubtedly have an effect for Tennessee, with Jalin Hyatt, Cedric Tillman and Jeremy Banks all not playing. Clemson has a pair of key defensive starters opting out, but the Vols are certainly taking the bigger blow when it comes to opt-outs. How much will that affect the Vols, though? I’d be wrong if I said very little. But the receivers are good enough to where if Milton is on, and can efficiently attack Clemson’s secondary, Tennessee can put up points on the Tigers.

But that is too much of a question mark for me to confidently pick Tennessee. Ultimately, what I saw from Cade Klubnik in the ACC title game tells me that Clemson’s offense, that struggled mightily in 2022, will be able to score 30+ against a Tennessee defense that has struggled and is now without Jeremy Banks. And Tennessee’s offense, while it has potential, does not have enough firepower to score five touchdowns against the Tigers’ defense.

Tennessee is looking to cap off its best season in at least two decades the right way against Clemson in the Orange Bowl. The Tigers are a hard team to figure out this late in the season especially for one without crippling opt outs. Potential first round picks Trenton Simpson and Myles Murphy are opting out but the Tigers’ defense is full of talent. Clemson enters the game 11-2 with both losses coming to solid out of conference opponents. In fact, the two teams Clemson has lost to — Notre Dame and South Carolina — face off in the Gator Bowl. But Clemson has also moved on from quarterback DJ Uiagalelei and freshman Cade Klubnik looked like an upgrade in the ACC Championship game.

Opt outs have been a bigger storyline for Tennessee entering the game. Star receivers Jalin Hyatt and Cedric Tillman aren’t playing and neither is linebacker Jeremy Banks. All eyes are on Tennessee’s offense and specifically quarterback Joe Milton III. Milton is getting an early audition for the starting quarterback position and he’ll do it with the receivers that are returning next season. The biggest matchup of the game is Tennessee’s offensive line against Clemson’s talented front seven. If the Vols are going to have extended offensive success, they need their run game to be protective and offensive line to give Milton time.

Clemson’s offense isn’t elite but has enough talent to score in the 30s against a shaky Tennessee defense. Whether Tennessee can force Klubnik into poor decisions is a major facet of this game and Tennessee’s chances of pulling the upset. To me, the game comes down to whether Milton can consistently make plays with his arm to beat the Clemson defense. I don’t think Tennessee’s running game will be non existent but they won’t be able to lean on it like they did against Vanderbilt. Until I see Milton deliver consistently throughout a game against a top end opponent I’m going to be skeptical. Tennessee’s special season ends on a sour note.