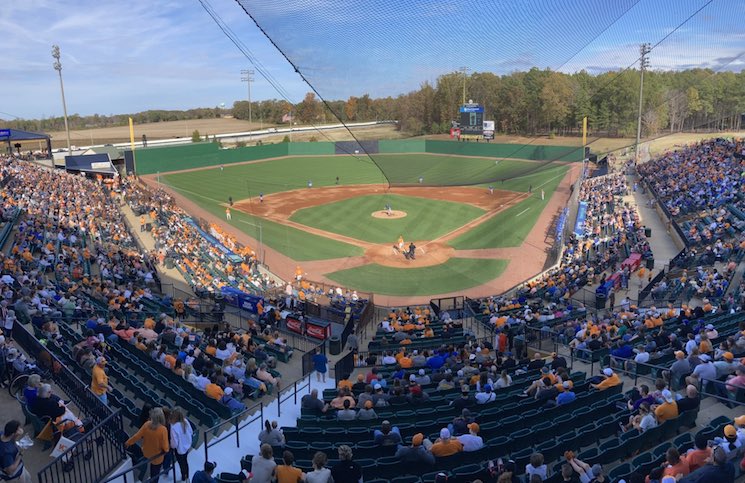 JACKSON, Tn — Tennessee baseball battled Memphis in an 18 inning scrimmage at the Jackson Baseball Stadium Sunday. The Vols won the first nine innings, 9-1, and led 9-2 through the first two innings of the second nine innings.

I departed after the day’s 11th inning so the stats and observations aren’t complete from the full 18 innings.

After facing Wake Forest last month, the neutral site matchup against Memphis was the last time the Vols will face anyone but themselves until the 2023 season begins.

Outfield competition is the major talking point around Tennessee this offseason so it was Interesting to see freshman Dylan Dreiling, junior Kyle Booker and senior transfer Griffin Merritt as the starters in the scrimmage.

The trio led the way for the Vols’ offensive production. Booker was the best player on the field, hitting three doubles including one that would have been a homer at Lindsey Nelson Stadium.

The freshman Dreiling was very impressive, spraying the ball all over the field with a pair of hits.

Merritt had the worst day of the bunch, striking out twice. Still, the Cincinnati transfer worked a walk and hit a two-run home run in the larger ballpark.

Freshman outfielder Reese Chapman didn’t play in the first nine innings but impressed in the part of what I saw in the second nine innings.

Christian Moore lived on base, working three walks and even stealing a base.

Former junior college transfer Logan Chambers has had a solid fall and was really impressive Sunday.

I wrote earlier this fall that back up catcher Charlie Taylor looks improved. With Jared Dickey sidelined the rest of the fall, Taylor had a nice Sunday. The junior drove in a run, reached base on a hard hit error and flew out to the warning track.

On the mound, the depth of Tennessee’s pitching staff showed up. The Vols didn’t even use main arms Chase Burns, Drew Beam or Camden Sewell.

Evans was on the verge of being a contributor last season as a freshman and has been impressive all fall. He pitched a clean third inning against the Tigers.

Fitzgibbons impressed in the preseason as a freshman but hasn’t found his footing through his first two college seasons. He’s seemingly turned a corner this fall with Tony Vitello saying Fitzgibbons “believes his time is now.”

Sechrist was impressive working around a leadoff double and Bimbi worked a 1-2-3 inning with a strikeout.

Jenkins had an impressive afternoon as well.