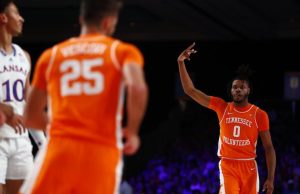 After a terrific Thanksgiving week showing in The Bahamas for the Battle 4 Atlantis, the Tennessee basketball team is on the rise in the latest Top 25 AP Poll.

Tennessee swept its way through the three-day tournament with three big wins, all impressive for different reasons. The Vols began by shutting the door on Butler in an emphatic way to begin the tournament and then forced Southern California into a turnover frenzy in the midst of a thrilling overtime win. Tennessee rounded out the tournament with a physical and statement-making win over then-No. 3 Kansas on the third day.

After previously being ranked at No. 22 in the polls, the Vols have climbed all the way up to No. 13 in the week three rankings. Tennessee began the season at No. 11 before dropping to the No. 22 spot after the Colorado loss in Nashville.

Speaking of No. 11, though, both Arkansas and Alabama come in one spot above Tennessee, tied in the 11th spot. The Crimson Tide are coming off of a gigantic four-overtime win over No. 1 North Carolina in the third-place game of the Phil Knight Classic. The Tar Heels dropped a game to then-unranked Iowa State the night before as North Carolina now sits at No. 18.

The trio of No. 11 Alabama, No. 11 Arkansas, and No. 13 Tennessee are the highest-ranked SEC teams among the pack. Kentucky dropped four spots from No. 15 to No. 19 after a loss to North Florida last Wednesday. Auburn replaces Kentucky at No. 15 after dropping two spots.

The previously-unbeaten Kansas Jayhawks fell from No. 3 to No. 9 after their loss to Tennessee. The Jayhawks are expected to be a team consistently in or around the Top 10 all year, which will continue to make Tennessee’s win look better and better.

While the loss to Colorado was a setback a couple of weeks ago, it looks like that loss will provide to be extremely beneficial for Rick Barnes’ team moving forward. Tennessee has elevated their game significantly since then behind the improved play of freshman phenom Julian Phillips, veteran Santiago Vescovi, and an emerging Jahmai Mashack.

The Vols also won the Battle 4 Atlantis tournament despite not having veteran leader Josiah-Jordan James on the floor for any of it.