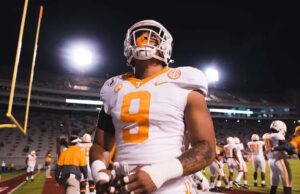 After spending three years with the Tennessee football program, junior defensive end Tyler Baron is still weighing his options when it comes to a decision for the 2023 football season.

According to Adam Sparks of Knox News on Tuesday, Baron said that he “has not made the decision” regarding his status next season.

The Knoxville native has played in all 35 games of his Tennessee career with 10 games played in 2020, 13 in 2021, and 12 (so far) in 2022. The junior defensive end is slated to participate in Friday’s Capital One Orange Bowl against No. 7 Clemson.

Tyler Baron racked up 21 tackles during his freshman season before really jumping onto the scene during his sophomore season with 30 total tackles and seven sacks for 30 yards. After 12 games of the 2022 season, Baron has collected 18 tackles and six and a half sacks for a total of 27 yards lost.

Baron was a four-star prospect from Knox Catholic before arriving at Tennessee prior to the 2020 season. Baron did enter the transfer portal after two seasons on Jan. 6, 2022, but withdrew his name one day later.

Tennessee defensive tackle Omari Thomas announced that he would be returning to Knoxville for his senior season next year, and so did linebacker Aaron Beasley.

Tennessee and defensive end Tyler Baron will take on No. 7 Clemson this upcoming Friday night, Dec. 30, in the Capital One Orange Bowl from Miami, Florida.