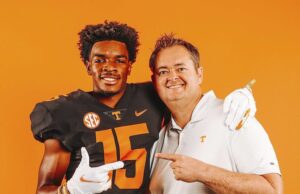 Despite already being enrolled at the University of Tennessee with several practices under his belt, Vols early enrollee wide receiver Nathan Leacock is still soaring up the recruiting rankings.

On3 Sports announced on Tuesday morning that Leacock has landed as the No. 45 overall player in the 2023 class in the organization’s final rankings of the year.

Leacock’s jump up the rankings over the last seven months has been nothing short of impressive. When the 6-foot-3, 195-pound receiver committed to Tennessee on July 22, 2022, Leacock was ranked as the No. 88 wide receiver in the class and the No. 19 player from the state of North Carolina.

Nathan Leacock is Tennessee’s third-highest player according to On3’s latest rankings behind quarterback Nico Iamaleava (No. 2) and defensive lineman Daevin Hobbs (No. 29).

“This group of guys is highly talented,” Tennessee head coach Josh Heupel said on early signing day, Dec. 21. “I believe that there are going to be dynamic, elite players inside of this group. We were recruiting this off of a lot of outside noise still when we began this process with these guys. I think it speaks to our guys’ ability to evaluate inside of our building, look at where they’re at, where they’re going, their athletic traits and project where they’re going to be by the time you get to signing day. That’s true with Nathan. He’s long. He’s athletic. He’s already made plays out on the practice field. The thing I’ve loved about him so far is his ability to take a rep, take coaching and then incorporate that into his next rep. That’s what you’re looking for in your young guys.”

Heupel mentioning the staff’s impressive ability to “evaluate” is proven to be true with Leacock. When Tennessee started going after the Raleigh, North Carolina native, Leacock was a three-star prospect and didn’t have nearly as much buzz around his name as he does now. Still, though, Heupel and his team saw the talent and potential that Leacock had.

Lo and behold, after committing to Tennessee during the summer and balling out his senior season at Millbrook High School, Leacock is seeing the result of his hard work on the recruiting trail.

Leacock was beyond dominant during his senior season. According to MaxPreps, Leacock ended the year as Millbrook’s top receiver with 1,703 yards and 23 touchdowns on 82 receptions. No other receiver on the team finished with more than 45 catches or 670 yards in total.

Nathan Leacock officially enrolled at Tennessee on Dec. 16 and was present for the Vols’ Orange Bowl practices and festivities in Miami.