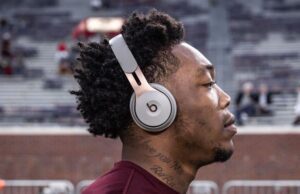 On Monday night, Thomas tweeted that he had officially been offered a scholarship from Tennessee.

Thomas, a sophomore from Eufaula, Alabama, led Mississippi State in receiving yards last season (626) and finished second on the team in touchdown receptions (7) and fourth in team receptions (44).

As previously mentioned, though, Thomas had several offers roll in on the first official day of the transfer portal being open.

“I think he’s improving,” Miss State head coach Mike Leach said about Thomas back in October. “I think he has to get more consistent. He has to be able to string together one good day at work after the next. And I also think that, you know, sometimes players need to understand the difference between being consistently good and occasionally great. I mean, it’s easy to, you know, have a great play here or there and think, ‘all right, well that’s it’ and, you know, cruise along. But that, you know, the most valuable guys, guys [who are] consistently good. The guy that you can count on every play. But I think he’s getting better and I think that he’s dangerous when he’s got the ball. He’s faster than he looks and he’s got a lot of range.”

Being fast and having range are undoubtedly a couple of attractive skill sets for the Tennessee offense. Especially considering Tennessee was the fastest team last year with up-tempo speed routinely throwing off unmatched competition.

Tennessee has been very successful with transfer portal wide receivers under Josh Heupel, as well.

Starting off with Velus Jones Jr., the 2021 wide receiver was critical for Tennessee in the slot and found his way to co-SEC Special Teams Player of the Year recognition after the season. Jones Jr then parlayed that success with Tennessee into a third-round draft pick with the Chicago Bears.

Then you have JaVonta Payton during the same year, a former Mississippi State receiver like RaRa Thomas, who became one of the SEC’s most dangerous opening drive receivers in a long time. Payton finished his one and only year in Knoxville with 18 receptions, 413 yards, and six touchdown receptions.

And, lastly, it’s impossible not to overlook how important former USC wide receiver Bru McCoy was to Tennessee this year. While he may not have had the preseason recognition like Cedric Tillman or the in-season production like Jalin Hyatt (no one had that, though), McCoy was unbelievably valuable for Tennessee as the Vols’ wide receiver room fought through injury concerns. McCoy also came up with the biggest 27-yard catch in Tennessee history to set up Chase McGrath’s game-winning field goal over Alabama in October.

RaRa Thomas was a three-star wide receiver prospect from the 2021 class. The 6-foot-1, 185-pound receiver had 10 scholarship offers including South Carolina. Tennessee was not one of the teams that originally offered Thomas during his high school recruitment.