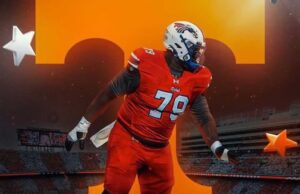 After adding two players from the transfer portal this week, Tennessee has also landed a commitment from a JUCO offensive lineman.

“I thank every coach humbly that gave me an opportunity and believed in me because last year I wasn’t in the shoes I’m in now,” Johnson wrote at the end of his tweet. “After long hard thought I’ll be committing to THE UNIVERSITY OF TENNESSEE #GBO”

Johnson is Tennessee’s 24th commitment to the 2023 class in addition to the two transfer portal players that Tennessee is bringing in.

The 6-foot-7, 350-pounder is originally from Savannah, Georgia. Since Oct. 23, Johnson has received 11 scholarship offers including Central Florida, Syracuse, Toledo, Houston, and Nebraska. According to 247 Sports, Johnson is set to visit Tennessee next Friday, Dec. 16.

Johnson plays at the tackle position for Hutchinson C.C., which is a place that has had Tennessee ties to over the years. Both Alvin Kamara and Cordarelle Patterson both spent time at Hutchinson C.C. before eventually finding their way to Knoxville.

As previously mentioned, Tennessee has also brought in TE McCallan Castles and K Charles Campbell from the transfer portal this week.

The Vols’ 2023 class, headlined by QB Nico Iamaleava and DL Daevin Hobbs, currently sits at No. 10 in the nation according to 247Sports. Additionally, the Vols come in as the 4th ranked team from the SEC behind No. 1 Alabama, No. 2 Georgia, and No. 6 LSU.

Other notable programs include future SEC programs Texas and Oklahoma at No. 4 and No. 7, respectively, with Tennessee’s Orange Bowl opponent, Clemson, landing at No. 9 in the rankings.

“First B4 anything in this world God comes first and I thank him for putting me in the predicament I never imagined I’d be in,” Johnson wrote in his full post. “I wanna thank My coaches at jenkins and Hutch Cc for not only seeing something I couldn’t see and believing in me but pushing me, Being there for my personal family issues and Loving me as one of their own and for caring for what I care for. I thank every coach humbly that gave me an opportunity and believed in me because last year I wasn’t in the shoes I’m in now. After long hard thought I’ll be committing to THE UNIVERSITY OF TENNESSEE #GBO”